Oryzon Genomics (MADX: ORY) is a clinical stage biopharmaceutical company headquartered in Barcelona, Spain. In December 2015, I provided a detailed overview of the company for investors (download the 19-page report). Oryzon is a leader in the development of epigenetics-based therapeutics. Epi is Greek for above, and genetics is the study of genes, heredity, and genetic variation in living organisms. As such, epigenetics is the study of “above the genes”, or more specifically, modifications that occur to the genes that results in activation or deactivation of gene expression that do not involve alterations in DNA sequence. These modifications are known as epigenetic modifications. The company is applying epigenetics to drug discovery and development through the regulation of gene transcription mediated by selective and reversible modifications to DNA and proteins.

These modifications have emerged as a key biological determinant of protein production and cellular differentiation, and play a significant pathogenic role in a number of human diseases. For example, reversible inhibition of protein expression through epigenetic modifications such as DNA methylation or histone alteration can be applied to disease-associated states, and creates a clear mechanistic pathway to target in the development of small molecule drugs as personalized therapeutics in diseases such as cancer, inflammatory diseases, metabolic diseases and neurodegenerative diseases. Below I provide an update to the Oryzon story for investors.

Oryzon has made significant progress with its development programs since my initial report in December 2015. The company’s lead candidate, ORY-1001 has progressed into the second part of a Phase 1/2a clinical study and a second candidate, ORY-2001, has entered the clinical for the treatment of Alzheimer’s disease. Below is a snap-shot of the current pipeline, followed by a detailed update on each program. 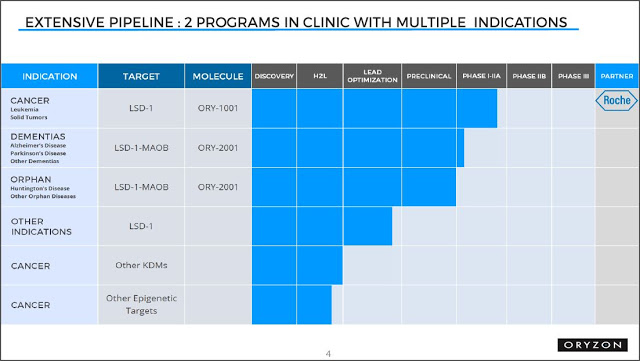 In April 2014, Oryzon announced they have entered into a worldwide collaboration to research, develop and commercialize inhibitors of LSD1 (KDM1A), including lead molecule ORY-1001, with Roche. Under terms of the agreement, Roche will have sole responsibility for developing and commercializing ORY-1001 and/or its backup compounds following completion of the ongoing Phase 1/2a clinical trial. The agreement includes the licensing of two patent families that Oryzon has created around LSD1, and includes options for other Oryzon programs to be incorporated in future. In return for licensing these rights to Roche, Oryzon received an upfront payment and a near-term milestone totaling $21 million, plus potential development, commercial and sales milestone payments across hematology, cancer, and non-malignant indications that could exceed $500 million, together with tiered royalties on sales which range up to mid-double digits.

Oryzon is currently conducting a Phase 1/2a clinical study with ORY-1001 in patients with refractory or relapsed Acute Leukemia. The Phase 1 portion of the trial was a multicenter, multiple ascending dose escalation study designed to ensure the safety (hematological and non-hematological toxicities), tolerability, and pharmacokinetics of ORY-1001 in patients with refractory and relapsed acute leukemia. This was successfully completed in late 2015. Preliminary results obtained from the trial demonstrate excellent safety, pharmacokinetics and pharmacodynamic measures, as well as target biology. No serious drug-related adverse events have been reported and the company believes they have established the maximum recommended dose for future clinical studies. This work was done at five clinical sites, four in Spain and one in the UK.

Oryzon has since expanded this study into five additional centers in France, Spain, and the UK for the Phase 2a portion of the trial. The enrollment criteria have also been expanded to include patients with target mutations such as mixed-lineage leukemia (MLL) and M6. This is a rare subset of disease in which leukemia stem cells are especially sensitive to LSD1 inhibition. This will allow the company to obtain preliminary signs of efficacy for ORY-1001, setting the stage for future development work to be conducted by Roche. The first patient in the Phase 2 portion of the trial was enrolled in November 2015. Preliminary data are expected to be reported at the American Society of Hematology (ASH) meeting in late 2016.

Beyond AML, Oryzon believes that ORY-1001 has utility in solid tumors. For example, LSD1 is overexpressed in multiple tumor types and the ORY-1001 mechanism of action suggests anti-tumor beyond leukemia. GlaxoSmithKline has progressed into Phase 1 clinical development with a similar LSD1 inhibitor, GSK2879552, for small cell lung cancer (SCLC), and based on published data, ORY-1001 looks several times more potent. As such, Roche is expected to follow Oryzon’s initial work in AML with a clinical program in SCLC in 2017.

Beyond oncology indications, the potential for LSD1 inhibitors in non-oncology hematological indications is being explored, for example in sickle cell disease (SCD), a rare genetic disorder affecting an estimated 70,000 to 100,000 individuals in the U.S. Independent data out of the University of Chicago on LSD1 inhibition was recently disclosed at the 56th American Society of Hematology (ASH) annual meeting in December 2014 using an Oryzon tool compound. The data highlight the potential for LSD1 inhibitors as treatment options for SCD.

In total, ORY-1001 is targeting potential indications with sales in the billions of dollars. With Roche taking over development responsibilities for clinical development of ORY-1001 following the completion of the current Phase 2a trial, it will be exciting to see where they take the drug in 2017.

Oryzon’s second drug candidate is ORY-2001, a potent and selective, orally available, small molecule inhibitor of LSD1-monoamine oxidase-B (MAO-B). Epigenetic inhibition of LSD1-MAO-B has been shown to have downstream effect on numerous genes and different biological pathways resulting in consequent transcriptional dysregulation. This is believed to be an important marker of disease status and its progression in many neurodegenerative diseases, such as Alzheimer’s disease. Initial pharmacology data with ORY-2001 suggests the drug has an excellent pharmacokinetic profile, with a wide therapeutic window and convenient once-daily dosing. Data shows the drug crosses the blood brain barrier with highly selective anti-LSD1 and MAO-B activity, with no off-target binding.

Preclinical data suggest that ORY-2001 improves cognition, with positive implications to diseases such as Alzheimer’s and Huntington’s disease. For example, in a non-transgenic mouse model of AD, company scientists saw a marked cognitive improvement correlating with changes in the expression of key genes in the hippocampus. In studies partially supported by the Alzheimer’s Drug Discovery Foundation, company scientists showed that ORY‐2001 provided a dose‐responsive protective effect in the medium and long‐memory of mice, compared to age-matched SAMP8 mice. Additional preclinical studies with ORY-2001 show improvement of survival and recovery of phenotypic characteristics in mouse models of HD and other neurodegenerative disorders

Oryzon received approval in Spain to initiate a Phase 1 study for ORY-2001 in January 2016. The randomized, double-blind, placebo-controlled single and multiple ascending dose program is designed to investigate the safety, pharmacokinetics, and pharmacodynamics of oral ORY-2001 in healthy subjects as well as an elderly population. The trial is being conducted at a university hospital in Barcelona, Spain. The first patient was dosed in April 2016. I expect that with positive data, Oryzon will move ORY-2001 into a Phase 2 study in patients with Alzheimer’s disease during the first half of 2017.

A timeline for future development or ORY-2001 pulled from the company’s most recent investor presentation can be seen below. Oryzon owns full rights to the drug; thus, the Phase 2 study could represent a significant valuation inflection for the company if successful. Alzheimer’s disease is obviously an enormous market, with approximately 5.2 million Americans and 5.8 million Europeans diagnosed or suspected of the disease according to Alz.org. Little success has been accomplished with respect to new Alzheimer’s treatments over the past decade. An epigenomic approach to Alzheimer’s, as well as Huntington’s disease and Parkinson’s disease, represents a novel and exciting new approach to these difficult to treat diseases.

In fact, Oryzon is not alone in this endeavor. Although Oryzon looks like the most advanced player, other companies are also pursuing an epigenetic entry for Alzheimer’s disease, such is the case of Rodin Therapeutics. Rodin, in spite of being still in early preclinical stage on their HDAC-2 selective inhibitor program, was acquired in January 2016 by Biogen on a pre-set deal acquisition that might get up to $485 million. This is no doubt reflecting the interest for this approach among the big players of the industry. 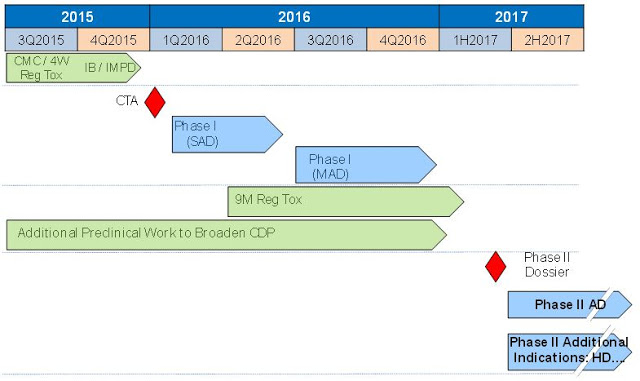 Update On The Financial Position

Oryzon ended March 2016 with €28.9 million in cash, equivalents, and short-term investment. Cash increased from the year-end 2015 by €7.3 million thanks to the loans that were obtained (see below) during 2015, the company received a total of €5 million from its collaborative research program with Roche. Other non-dilutive sources of cash include grants and loans supporting the work on ORY-2001 totaled €2.6 million.

In March 2016, Oryzon entered into a debt financing securing €10.5 million in cash. In total, Oryzon has raised more than €27 million in cash since July 2015. Total financial debt stands at €18.1 million. The current cash and short-term financial investments are € 29 million. Management projects operating burn in 2016 is expected to be between €10 and €12 million, thus the current balance is sufficient to fund the R&D operations for the current year. There are approximately 28.468 million shares outstanding.

Oryzon Genomics currently trades on the Madrid Stock Exchange (MADX: ORY) with a market capitalization of approximately €86 million. In my initial article back in December 2015, I outlined for investors why I believe the company is worth €200 million ($225 million USD) in value. I used a combination of peer-valuation, looking at recent deals between large pharmaceutical companies and smaller players in the epigenomic space, including the recent takeover of Tensha, a single asset spin off company from Dana Farber that had a Bromodomain inhibitor in Phase 1b and was acquired by Roche for $115 million upfront in January 2016 plus contingent payments that may reach up to $420 million, the Merck-OncoEthix deal valued at $110 million upfront plus $155 million in contingent payments, the Celgene-Quanticel deal valued at $100 million plus up to $285 million in contingent payments, and the Gilead-EpiTherapeutics deal valued at $65 million, and discounted cash flow based on the forecasted commercial success of ORY-1001 and ORY-2001. I encourage investors to take a look at my valuation for Oryzon Genomics, found pages 15 through 17 of that December 2015 report.

Young, healthy cells have an epigenetic setting that promotes the formation of repressive heterochromatin while allowing expression of housekeeping genes and genes involved in cell cycle control, stress resistance, and DNA repair. During aging, cells acquire epigenetic modifications, also known as methylation drift, which facilitates activation of undesirable chromosomal regions and repression of cell cycle and control genes. Some of these regulatory and control genes include very important tumor suppressor genes, while others might include genes that are involved in cell differentiation or specification, or play a role in protein folding and aggregation. Cell stress and methylation drift has been shown to contribute to the aging phenotype; however, these modifications are also susceptible to epigenetic alterations through pharmacology. And, since epigenetic alterations are more readily reversible than genetic alterations, interventions aimed to reverse undesirable epigenetic changes may have great potential to treat age-associated diseases, including various cancers and neurodegenerative disorders (Muñoz-Najar & Sedivy, 2011).

Oryzon is focused on developing epigenetic-based therapies and personalized drugs from its proprietary platform technology. The pipeline includes one compound in Phase 1/2a in oncology, ORY-1001, a highly potent LSD1 inhibitor with exquisite selectivity that has been granted orphan-drug status by the EMA for acute myeloid leukemia, a second compound in Phase 1 clinical trials, ORY-2001, for the treatment of Alzheimer’s Disease, and additional programs in other cancer indications in various stages of preclinical development. Based on a review of available literature and analysis of peers, the company’s strategy seems sounds and likely to create significant shareholder value if successful.