On September 19, 2016, MabVax Therapeutics, Inc (NASDAQ: MBVX) provided a brief update on the ongoing Phase 1 clinical trial testing the safety and tolerability of MVT-5873 as a monotherapy and with chemotherapy in subjects with advanced prostate cancer. MVT-5873 is the company’s fully human monoclonal antibody, HuMab-5B1, that targets the tetrasaccharide carbohydrate moiety sLeA (also known as CA19.9). MabVax has accumulated data that shows sLeA is expressed abundantly on a number of different tumor types, including up to 92% of pancreatic cancers.

Below is a quick review of the MabVax Phase 1 trial and the interim update.

MabVax is currently conducting a Phase 1 trial with MVT-5873 in subjects with advanced (stage 3 or 4) pancreatic cancer. It’s an open-label, multi-center, dose escalation trial that primarily will evaluate the safety and determine the maximum tolerated dose (MTD) of MVT-5873 as monotherapy (Group A) and in combination with a standard of care chemotherapy (Group B) in subjects with pancreatic and other CA19-9 positive malignancies. Secondary measures include pharmacokinetics (PK) and the relationship between circulating CA19.9 levels and tumor response.

The trial is taking place at three centers in the U.S., including the Memorial Sloan Kettering Cancer Center in New York from which MabVax licensed HuMab-5B1, and two research sites in the Sara Cannon Research Institute network in Tennessee and Florida. Recruitment initiated in February 2016 and a total of 13 subjects were included in the interim update announced this morning.

According to the available data, the pharmacokinetic profile for MVT-5873 that is similar to other monoclonal antibody therapeutics. In fact, dose levels already achieved in the MVT-5873 safety study now exceed the highest dose levels management expects to administer for the concurrent Phase 1 trial of MVT-2163, the company’s companion PET imaging product that is also underway and the expected dose level for MVT-1075, the company’s radioimmunotherapy candidate that combines MVT-5873 and the low-energy radionuclide 177Lu.

The company has also been monitoring patients using the validated tumor biomarker CA19.9 for levels both pre and post dose of MVT-5873. Published data shows that increasing levels of this biomarker have historically been used as a prognostic indicator of disease progression (1).

Management intends to provide a more comprehensive interim data analysis upon obtaining sufficient patient data before year-end. In the second portion of the trial, MVT-5873 at one dose less than the MTD will be used in combination with gemcitabine and nab-paclitaxel in 10 patients. Secondary objectives of the trial include evaluating tumor responses by RECIST 1.1 as well as the duration of response.

The company has disclosed in regulatory filing two weeks ago that twelve patients have been treated thus far, with nine through the safety evaluation time period. Of those nine, four patients are into the fourth cycle of treatment and one patient is into the fifth cycle. Four patients have a stable disease as assessed by CT scans. Biomarker analysis shows CA19.9 has decreased in all patients, including measuring in the normal range for three patients with stable disease. These early results are promising, and additional preliminary data are likely to be released by the end of the third quarter, representing a potential near-term catalyst for the stock.

Why This Interim Update Is Important?

Safety and PK data from a Phase 1 interim update in only 13 patients would normally not be considered market moving material. However, what investors need to understand is the expected progression in MabVax’ pipeline over the next year. MBT-5873 is the “naked antibody”. It is the highly specific and targeted delivery vehicle for the imaging agent or anti-cancer payload, which includes both radionuclide and cytotoxic agents. By demonstrating that MVT-5873 is safety, well tolerated, and has therapeutic-like pharmacokinetics, MabVax now has now derisked progressing MVT-2163 and MVT-1075, which I believe have tremendous commercial potential. 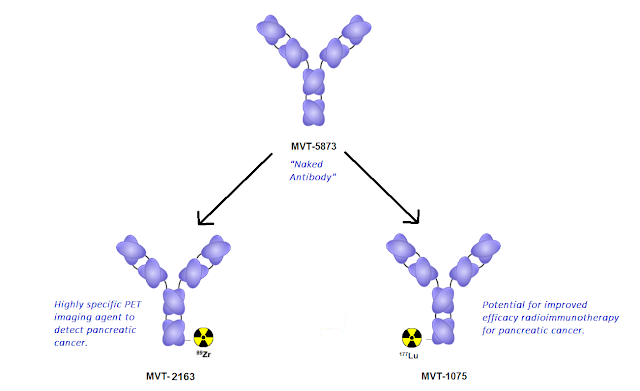 Today’s interim update is the first step in validating two potential blockbuster products under development at MabVax Therapeutics. Pancreatic cancer is notoriously difficult to detect and even harder to treat, making it one of the most deadly forms of cancer. This is because pancreatic cancer typically has few if any symptoms early on, and it is not until it metastasizes to other parts of the body that patients begin to experience noticeable symptoms. Due to the fact it is rarely found before metastasizing, the five-year survival rate for patients with stage 3 or 4 pancreatic cancer is only 1-3% (2).

The American Cancer Society estimates just over 53,000 adults will develop pancreatic cancer in the U.S. each year; nearly 42,000 will die from the disease in 2016 (3). Standard of care treatment for metastatic pancreatic cancer is the chemotherapeutic agent gemcitabine either as a monotherapy or in combination with erlotinib (Tarceva®) or nab-paclitaxel (Abraxane®). The use of gemcitabine and erlotinib resulted in one-year survival rates of 23% compared to just 17% for patients treated with only gemcitabine along with an increase in overall survival from 5.91 months to 6.24 months (4). Nab-paclitaxel combined with gemcitabine resulted in an even greater increase in overall survival from 6.7 months to 8.5 months (5). However, given that overall survival rates when using each of these treatments is still well below a year, it is clear that more efficacious therapeutic options are desperately needed.

MabVax’s unique antibody discovery platform differentiates it from other companies developing antibody therapeutics as it allows for the generation of fully human antibodies while also taking advantage of the capabilities of the human immune system to generate products that are highly specific and efficacious. The company’s unique platform also allows for the use of lead antibody products in a number of different modalities, as exemplified by the development of HuMab-5B1 as a therapeutic agent (MVT-5873), an imaging agent (MVT-2163), a radioimmunotherapy (MVT-1075), and an antibody drug conjugate.

The company will likely be announcing additional data from the two ongoing Phase 1 clinical trials for MVT-5873 and MVT-2163 in the next few weeks and I will post an update with an analysis of the data after it is released. As noted above, these data are important because confirmed safety and therapeutic-like PK derisks the advancement of the next-generation compounds. I’m particularly intrigued by what the company can present with MVT-2163 because MVT-1075 is essentially the same thing, only with a focused cancer-killing radionuclide 177Lu.

I believe HuMab-5B1 has the potential to make a real impact due to its high specificity and efficacy in pre-clinical models, particularly as a radioimmunotherapy or antibody drug conjugate product. MabVax currently has a market cap of approximately $25 million. The company just recently raised cash and since a successful pancreatic cancer treatment would easily produce >$500 million in peak revenues, the risk/reward profile for MabVax is quite compelling at its current valuation.