BrainStorm Cell Therapeutics (NASDAQ: BCLI) is a biopharmaceutical company developing adult stem cell therapies for a range of neurodegenerative diseases, with an initial focus on Amyotrophic Lateral Sclerosis (ALS). The company has a proprietary technology that uses a novel differentiation protocol such that mesenchymal stem cells (MSCs) are converted into neurotrophic factor-secreting cells (MSC-NTF cells, NurOwn®). BrainStorm then returns the MSC-NTF cells to the patient at or near the target area for treatment.

In July 2016, BrainStorm reported top-line data from a Phase 2 double-blind, placebo controlled multi-center study with NurOwn® for the treatment of ALS. The company is currently in the process of finalizing the full data analysis from this trial and plans to submit the results for presentation at a medical conference during the first half of 2017. I believe results for the Phase 2 study were very positive; yet, the stock has not reacted accordingly and there seems continued investors confusion around the story. In the meantime, additional studies are being planned to advance NurOwn® into multi-dose and registration trials.

The recently completed Phase 2 study took place at three prestigious medical centers in the U.S.: Mayo Clinic, The University of Massachusetts Medical School, and the Massachusetts General Hospital. To give investors a better sense of the data and the path forward for Brainstorm, I decided to speak with one of the Principal Investigators from the Phase 2 study, Merit E. Cudkowicz, MD, MSc. Dr. Cudkowicz is a Professor of Neurology at Harvard Medical School, Chief of Neurology at the Massachusetts General Hospital and Director of the ALS Multidisciplinary Clinic.

BioNap: Hello Dr. Cudkowicz, thank you very much for taking the time to speak with me today! Before we get into the data, I wanted to start with your quick thoughts on where we are in the treatment of ALS today and challenges that practicing neurologists like yourself face when treating ALS patients?

Dr. Merit E. Cudowicz: ALS is notoriously difficult to treat. We do not have a lot of good options available today. One of the major challenges is the heterogeneity of the patients. Patients progress at all different speeds, some rapidly decline over only a few years while others slowly deteriorate over a decade. Either way, the disease is almost always fatal.

BN: Let’s talk about the utility of a cell therapy for ALS. There seems to be some confusion and trepidation over cell therapies in the U.S., even autologous cell therapies derived from bone marrow. People do not seem to understand what that means, what the process is for making a product like NurOwn®, or whether or not this is even a feasible concept to get past the U.S. FDA. You’ve dosed patients with NurOwn. What are you experiences with the harvesting of the cells and the transplantation back into patients?

MC: We have not had any significant issues that would limit uptake, and we’ve dosed over a dozen patients at MGH. Physicians and patients are looking for any option to treat ALS. We want to try anything that can help with this devastating disease. For physicians, we want something that has a mechanism to succeed. Be it cell therapy or some other approach, if it is scientifically valid, we are going to give it a chance. 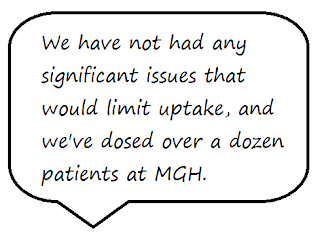 BN: Any anxiety from patients over the process? NurOwn® is a significant number of injections – I believe 24 IM plus one IT – for the patient to take.

MC: Many of these patients are experienced with injections, so that is not a problem; and, it’s a very small needle. Plus, we are analyzing the data and looking at the potential to reduce the number of injections. For example, we think the efficacy is coming from the intrathecal (IT) injection, which presents us the opportunity to potentially eliminate the multiple intramuscular (IM) injections into the arms. In past studies, we administered NurOwn® via unilateral or bilateral IM injections into the arms plus an IT injection. If we can eliminate the multiple IM injections, administration becomes far more efficient for the physician and tolerable for the patient. Additionally, administering drugs via IT injection is standard practice for neurologists and anesthesiologists, so we do not see any meaningful issues here.

BN: Before we get into the efficacy data from the Phase 2 trial, let’s talk about safety because that really was the primary endpoint. This is obviously a challenging population to treat. I’m impressed that 92% of the subjects dosed with NurOwn® completed the study. What were your experiences with NurOwn® based on the safety and tolerability of the therapy?

MC: So far it is very good. We do not see any side effects or adverse events that would limit uptake or our ability to move forward with advanced studies. As I noted above, we are looking at potentially eliminating the IM injections to increase efficiency and tolerability to the patient.

BN: Is there anything that gives you concern about moving NurOwn® into Phase 3, specifically keeping in mind that the company expects this to be a multi-dose protocol?

MC: No, on the contrary, we are quite excited about the opportunity to move forward with a multi-dose protocol. 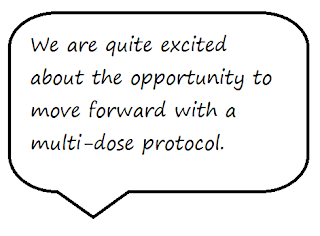 BN: Let’s talk about the response rate in the Phase 2 trial, or more specifically, the responder analysis. There was obviously a great response immediately after transplantation. The data show a 74% response rate for week 2 and a 54% response rate after week 4. In both of these instances, the improvement equated to a 100% improvement in slope (ALSFRS-R score) compared to pre-treatment. First question, are these types of stark improvements common in ALS patients?

MC: No, not at all. I’ve been treating patients with ALS for over 25 years and we very rarely see instances of 100% improvement. Patients will ebb and flow and the disease has periods of stabilization and then rapid decline, but improvement is very rare in ALS. The trajectory is almost always downhill. We do not see this type of response on riluzole. 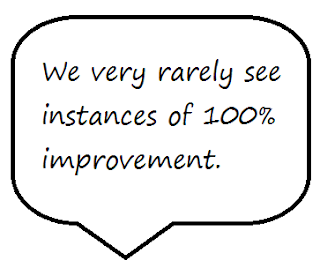 MC: Any period of improvement for the patient is meaningful because progression can often be rapid and fatal. So the longer we can keep a patient from deteriorating the better chance we have to increase life expectancy. The goal is to keep the patient ambulatory and off a respiratory, so if we can delay this it is surely meaningful to the patient.

BN: In this regard, by the end of the 24-week study, the separation of the NurOwn® subjects from the placebo group was no longer statistically significant. Are we simply dealing with the fact that NurOwn® cells are only active for a few weeks?

MC: We know the cells are active and produce neurotrophic factors for a period. Exactly how long we are still analyzing. I am excited about the biomarker data and the evidence that MSC-NFT cells, in fact, do what we say they do. That said, more studies are needed to perfect the dosing schedule.

BN: Do you think that subsequent transplantations of NurOwn would elicit a more durable response, and if so, how many more transplants are necessary and when do you think it makes sense to administer the second or third, and so on, doses of the product?

MC: In the upcoming Phase 3 study we plan to treat the patients every two months for a total of three treatments. We are optimistic that if we continue to administer cells that produce neurotrophic factors we will see a durable response. We plan to conduct additional biomarker analysis in this trial to further quantify this effect but NurOwn® very much is a therapy much like a pill. If you take one pill the effect may only last one day. Almost all therapies require subsequent dosing and it is logical to believe that we will see an improved response with follow-up treatment. 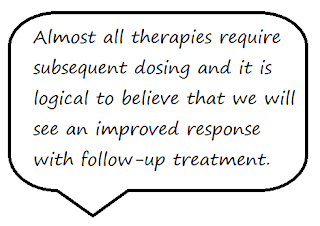 BN: I’m intrigued by the fact that patients with the most rapidly declining ALSFRS-R score during the run-in period seemed to response better to NurOwn® than “slow progressors”. The company defined anyone with a pre-treatment slope ≥ -2 as a “rapid progressors”, and surprisingly these patients has an overall response rate far superior to the “slow progressors”. The data was statistically significant versus? the placebo group after weeks 2 and 4. Is this simply a result of how the disease ebbs and flows or is there something mechanistically you think is going on in these patients?

MC: I think it is a combination of the ebbs and flows of the disease but also the fact that these are the patients that we can show a benefit in for such a short trial. It is easier to show a benefit in a population with a rapid progression compared to a patient that does not change. So there may not be anything from a mechanism standpoint with these patients, it’s just the fact that to show a difference a patient needs to have a change in status.

BN: The biomarker analysis that the company did I find most interesting. This is a procedure, although so far that looks very safe, a neurologist like yourself still needs to evaluate on a patient by patient basis. Treated patients saw increased levels of neurotrophic factors in the CSF such as VEGF and HGF and decreased levels inflammatory markers such as MCP-1 and SDF-1. Is this something feasible to monitor to see if patients are responding to the cell therapy?

MC: Absolutely! We are looking for ways to treat ALS patients and the better we can understand if the treatment like NurOwn® is working, the more likely we will be to initiate therapy. If the cell therapy is working, we can continue to administer to patients. If not, we can try alternative treatment options, but right now we do not have a lot of options, so the potential to try something like NurOwn® and then monitor the patient for biological effect almost in real-time is very exciting. 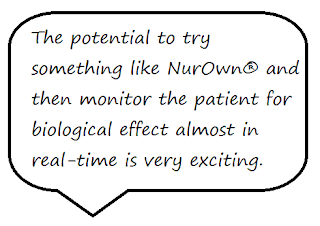 BN: If the Phase 3 study works and the safety data continue to look good, is NurOwn® a “no-brainer” in your view?

MC: Well, like I said, we do not have many options available today, so I’m excited about moving forward into the next set of studies. We do not have any hesitations at this point and the results so far are very encouraging.

MC: You are very welcome!

BrainStorm stock is looking extremely interesting to me at this level. The recently reported top-line data from the Phase 2 ALS program with NurOwn® demonstrated clear proof-of-concept and a follow-on Phase 3 multi-dose program is currently being planned in the U.S. I think the next steps will be very interesting because if BrainStorm can succeed in turning ALS into a chronic disease through maintenance doses of NurOwn®, they are sitting on a blockbuster.

The opportunity to reduce the number of injections to only one IT every two months really increases the applicability of the product in my opinion. That’s superior dosing to many of the world’s best-selling biologic drugs. In the meantime, the initiation of the Phase 3 program and the presentation of the full Phase 2 data in 2017 have the potential to act as catalysts to drive the – meaningfully undervalued – shares higher.

Investor concerns over an imminent massive dilutive offering are misguided. BrainStorm entered October 2016 with $11.2 million in cash on hand and burned only $0.3 million in the entire third quarter. The company will likely need cash at some point in the future, as will the majority of small-cap biopharma companies, but the company looks to have an adequate runway and some flexibility today. This is a name worth taking a serious look at.