“Though this be madness, yet there is method in ’t”
– Hamlet: Act II, Sc 2
If you watch a lot of television, especially things like the National Football League (NFL) or PGA Tour golf, or even CNBC, it is virtually impossible to go through a sitting without seeing a commercial for an erectile dysfunction (ED) drug. Most of us find these commercials rather annoying. Eli Lilly seems to have taken the high road with its, “Why Pause?” and “Be Ready” campaign that shows middle-aged and elderly couples in everyday life situations ready to enjoy the moment, whereas Pfizer pretty much just sells sex in a pill by showing an overtly sexual older women already waiting in bed.

Yet, despite the different marketing strategies, these commercials have one almost identical thing in common – the fast-talking risk and adverse event disclaimer at the end. For example, the Viagra commercial concludes with, “Ask your doctor if your heart is healthy enough for sex. Do not take Viagra if you take nitrates for chest pain as it may cause an unsafe drop in blood pressure. Side effects include headache, upset stomach, flushing, and abnormal vision. Seek immediate medical help for an erection lasting more than four hours. Stop taking Viagra right away if you experience a sudden loss of vision or hearing.” The Cialis disclaimer is virtually identical.

The package inserts for both Viagra (sildenafil) and Cialis (tadalafil) are also quite similar, and include strong contraindication language for the use of nitrates and guanylate cyclase stimulators in patients with high blood pressure. Both drugs have warnings and precautions about the co-administered use of alpha-blockers or other antihypertensive agents. Additional language in the package insert cautions against use of these drugs in combination with aspirin or heparin to avoid the risk of bleeding.

The Viagra label includes the following language with respect to the cardiovascular risks:

The Cialis label is a bit more involved, and advises patients with aortic stenosis and idiopathic hypertrophic subaortic stenosis to be careful when taking the drug. It even goes so far as to warn patients with recent history of myocardial infarction, unstable angina, NYHA Class 2 or greater heart failure, uncontrolled arrhythmias or hypotension, and stroke to avoid use of the drug altogether.

Both Viagra and Cialis are phosphodiesterase type 5 (PDE5) inhibitors. The drugs block the degradative action of cyclic guanosine monophosphate-specific phosphodiesterase type 5 on cyclic GMP in the smooth muscle cells lining the blood vessels supplying the corpus cavernosum of the penis. An erection is caused by increased blood flow into the penis resulting from the relaxation of penile arteries and corpus cavernosal smooth muscle. This response is mediated by the release of nitric oxide (NO) from nerve terminals and endothelial cells, which stimulates the synthesis of cGMP in smooth muscle cells. The inhibition of PDE5 enhances erectile function by increasing the concentration of cGMP in the corpus cavernosum and pulmonary arteries.

Tadalafil’s (20 mg) effect on sitting blood pressure in healthy male subjects was not significantly different from placebo, but both drugs are contraindicated and dangerous to use in patients already taking antihypertensive agent like nitrates or alpha-blockers. Two smaller players in the ED market, Levitra (vardenafil) and Stendra (avanafil) are also PDE5 inhibitors and carry almost exactly the same warnings, precautions, and contraindications as the market leaders.

According to a Feldman HA, et al., 1994 (Massachusetts Male Aging Study), 52% of the 1,290 respondent between the ages of 40 and 70 years old reported some degree of erectile dysfunction. Another study by Selvin E., et al., 2007 found very similar results, and both studies concluded that persons with a history of heart disease, hypertension, diabetes, and their associated medications had a higher probability of impotence. In fact, a paper by Shah NP., et al, 2015 notes that vascular erectile dysfunction is a powerful marker of increased cardiovascular risk. The target market for ED drugs is the exact category of patients that are contraindicated for their use!

But given the labels and contraindications, these drugs could be even bigger. For example, a study published by Wilkins, JT. et al., 2012 in the Journal of the American Medication Association calculated the lifetime risk for cardiovascular disease in the U.S. Dr. Wilkins and his colleagues at the Department of Preventive Medicine, Northwestern University Feinberg School of Medicine, pooled data from five long-running studies of U.S. heart health, and used them to calculate disease risks at various ages, and for people with different combinations of risk factors. Together, the data cover tens of thousands of people who were monitored and followed up for cardiovascular events for various periods between 1964 and 2008. The results show that at age 45, there is a 60.3% probability for males and a 55.6% probability for females in developing cardiovascular disease. Those are astonishing statistics! Even if we round down to ~50%, Pfizer and Eli Lilly are missing half the market with their respective blockbuster drugs – an estimated $4 billion left on the table because of label contraindications and safety concerns.

For example, a 2008 study found that 67% of diabetics have high blood pressure. This makes them ideal for some sort of antihypertensive medication, which most likely means they should not also be taking ED drugs like Viagra (sildenafil) and Cialis (tadalafil). That’s unfortunate, because the ADA pegs the rate of ED in patients with diabetes between 35% and 75%. If we use the middle number of 55%, there are some 16 million diabetics in the U.S. with ED, and the majority of them should not be taking sildenafil or tadalafil.

When I first became aware of CF602 I thought, “Good grief, do we really need a fifth erectile dysfunction drug on the market?” This is madness! CF602 is still in preclinical development and not likely to be commercialized until 2020. By that time, both sildenafil and tadalafil will be generic and the U.S. ED market, a $4+ billion market at peak, will likely collapse under the pressure of cheaper generic alternatives. Can-Fite is not only late to the party, the party is just about over.

But there’s a method to the madness here. In fact, the more work I’ve done in this area the more the potential for CF602 is starting to resonate with me. CF602 is not a PDE5 inhibitor; the drug is a A3 adenosine receptor (A3AR) allosteric modulator. A3AR is a Gi-protein coupled receptor over-expressed in inflammatory and cancerous cells and in the peripheral blood mononuclear cells of individuals with inflammatory conditions (Cohen S., et al., 2014; Borea PA, et al., 2015). As such, Can-Fite’s two most advanced drugs, CF101 and CF102, are A3AR agonists under development for rheumatoid arthritis/psoriasis and hepatocellular carcinoma.

This creates a number of benefits with respect to drug development. It allows for concomitant dosing with existing small molecules to target one pathway (e.g. lowering the dose and enhancing the signal), thus improving the effects on a specific target. This also works to improved tolerability and reduce side effects because the same level of efficacy can be achieved with a lower dose of agonist/antagonist. Finally, by keeping the body’s own natural ligand in place as the signaling molecule, it reduces the effects of off-target orthosteric agonists/antagonists, which is what has important potential implications in the treatment of ED.

In June 2015, Can-Fite Biopharma announced results from a study with CF602 in a diabetic rat model. Rats treated for 1 and 5 days with CF602 demonstrated a 188% (p<0.01) and 250% (p<0.001) increase in penile intracavernosal pressure (ICP), respectively compared to placebo. Importantly, CF602 was shown not to affect systemic blood pressure in this model. If this type of data holds in human trials, CF602 may be able to avoid the restrictions and limitations that holdback sales of sildenafil or tadalafil in patients taking anti-hypertensive medications or at high risk for cardiovascular disease. 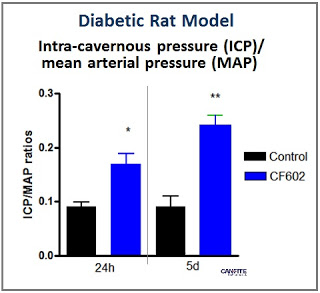 Among the most important factors to affect erectile function is nitric oxide which is released by endothelial cells that line the corpus cavernosum and control smooth muscle relaxation and vascular inflow. Can-Fite’s preclinical data shows that the drug works as a vasorelaxant to promote smooth muscle relaxation and penile erection. New diabetic rat data shows that the drug restores the impaired vascular endothelial growth factor system, thereby inducing an increase in nitric oxide resulting in significant improvement of penile erection compared to placebo. This mechanism of action is similar to that of sildenafil, with CF602 demonstrating effects on erection superior to that demonstrated by sildenafil in animal studies.

It has been well established that release of nitric oxide is diminished in patients with diabetes (Tessari P., et al, 2010). It has also been proven that a decrease in nitric oxide is a leading contributor to erectile dysfunction (Vernet D., et al., 1995). If Can-Fite can continue to show that CF602 increases nitric oxide production without impacting systemic blood pressure, CF602 has meaningful potential for the treatment of erectile dysfunction in adult males with diabetes or at elevated risk of cardiovascular disease. This would be a superior label to sildenafil and tadalafil, potentially roping-in some 15 to 30 million Americans underserved by the two blockbuster drugs.