This article is a quick introduction to CoLucid Pharmaceuticals (NASDAQ: CLCD) and the company’s  first-in-class 5-HT1F receptor agonist, lasmiditan (COL-144), for the acute treatment of migraine. An oral formulation of lasmiditan is currently in Phase 3 development and an intravenous formulation for use in the emergency room setting is in Phase 2 clinical trials.

The Phase 3 clinical trial, called SAMURAI, is a randomized, double-blind, placebo-controlled study in subjects with a disabling migraine (MIDAS score ≥ 11) designed to enroll 2,225 patients into one of three arms: lasmiditan 100 mg, lasmiditan 200 mg, or placebo. The primary outcome is the proportion of subjects headache pain-free at two hours post-dose. CoLucid has received a U.S. FDA Special Protocol Assessment (SPA) agreement for the SAMURAI study. I expect top-line data during the third quarter 2016.

I will follow in the coming months with a detailed analysis of lasmiditan, the clinical data, the market opportunity, CoLucid’s path to market, and what the shares might be worth if the pending SAMURAI trial with lasmiditan is positive. However, for today, given that CoLucid just published some interesting “Migraine Facts”, I thought we would start with a simple introduction to migraine headaches, with some interesting facts of which investors might not be aware.

A migraine is a serious, debilitating neurological disease. The disease affects roughly 13% of the global population and is more common than asthma, heart disease, and diabetes in the U.S. (source: U.S. CDC, 2014). That equates to approximately 36 million individuals in the U.S., approximately 10% of which report having ≥ 15 or more episodes per month according to the 2011 Project Atlas study by the World Health Organization. It affects 30% of women over a lifetime and impacts life in almost 1 out of 4 households (source: American Headache Society).

According to data from IMS Health, sourced from adjudicated claims for health plan enrollees across the U.S., 3.7 million adults in the U.S. are diagnosed with migraine headaches, which is only approximately 10% of the total afflicted population based on the WHO Project Atlas study. The disease is far more common in women than men by 4:1 (Vos T, et al., 2010), and over 50% of patients are 40 years and older. In fact, women between the ages of 40 and 49 constitute the largest age cohort of patients both diagnosed and treated for migraines (IMS Health, 2016).

A Challenged Group To Treat

Migraines are often idiopathic in nature, but can be triggered by food, environmental factors, stress, weather, and exposure to light. There is even genetic predisposition to a migraine, with approximately 80% of migraine sufferers having a family history of a migraine affecting a first-degree relative (source: American Headache Society). Comorbidity with cardiovascular disease is also quite common, and patients with a migraine have a 54% increase in the risk of developing coronary artery disease (CAD) events compared to the general population (9.9% vs. 6.4%) per IMS Health claims. The increased risk of CAD events in the migraine population limits potential treatment options. For example, approximately three-fourths of adults diagnosed with migraine carry cardiovascular conditions or risk factors that contraindicate or warn against triptan use. 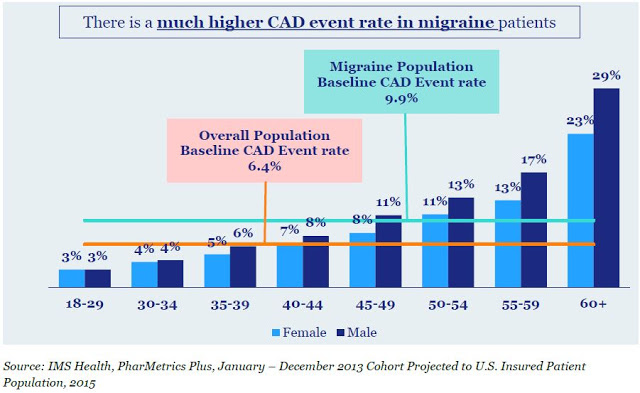 Direct medical costs associated with migraines in the U.S. approximate $17 billion. Only approximately 50% of migraine sufferers seek prescription medications for an attack; however, 25% have reported visiting an emergency room as a result of the severe pain, resulting in over 5 million ER visits per year according to IMS Health. Over 90% of individuals with migraines report missing work due to an attack, leading to 112 million days of lost work annually (IMS Health, 2016). Another 50% say that migraines restrict activities or interfere with daily activities on a regular basis (Migraine.com). Indirect medical costs from lost work or lost productivity amount to another $15 billion in the U.S. (Mennini FS, et al., 2008), and according to an IMS Health audit in 1999, migraine headaches account for 20% of all outpatient visits to a neurologist.

Despite the wide prevalence of the disease, over 85-90% of migraine sufferers go undiagnosed (IMS Health, 2016). Of diagnosed patients, approximately 50% attempt to manage the disease by the use of OTC medications, including non-steroidal anti-inflammatory drugs (ibuprofen, naproxen, etc…), aspirin, and acetaminophen. However, for many moderate-to-severe migraine sufferers, NSAIDs, and other OTC medications do not provide sufficient relief. Thus, approximately 4.0 million individuals each year will visit a primary care physician (65%), neurologist (20%), or headache specialist (15%) seeking prescription medications to treat their disease.

Within the prescription market, triptans control the majority of the share, accounting for 91% of migraine prescriptions and 72% of migraine units according to a June 2010 audit by IMS Health. Sumatriptan, sold by GlaxoSmithKline (NYSE: GSK) as Imitrex® is the triptan market leader, with approximately 75% market share. Imitrex® generated peak sales in the U.S. of approximately $1.1 billion before the patent expiration in 2008. Pharmacies dispensed approximately 13 million prescriptions for Triptan or Triptan-products during 2014. One-third of these patients are taking multiple drugs to control their disease. Migraine prescription drug sales in seven countries (U.S. and Europe) were estimated to be $3.3 billion in 2015 and are expected to grow to $4.4 billion in 2020.

Despite the popularity of triptans, approximately 76% of triptan users have conditions or risk factors as defined by the Framingham Heart Study results (2003) that contraindicate or warn against triptan use (IMS Health, 2016). These triptan-intolerable patients included those at high risk for coronary artery disease, a history of stroke, peripheral vascular disease and chronically uncontrolled high blood pressure. These patients are also often on concomitant medications that could have potentially dangerous side-effects when used in combinations with triptans.

For example, the label for sumatriptan includes “Warnings and Precautions” that note potential risks for use of the drug in patients with a history of myocardial ischemia, myocardial infarction, and angina. Sumatriptan is contraindicated for use in these patients. The FDA also cautions on use of the drug in patients with a history of arrhythmias, chest, throat, neck, and/or jaw pain or pressure, or at risk for cerebrovascular events. Contraindications and warnings against triptan use result in a significant number of migraine patients turning to dangerous butalbital and opioids for treatment. According to IMS Health, 17% of adults suffering from migraine use butalbital and opioids to manage their disease, with a disproportionately high percent of these patients having either had or are at risk for CAD events. 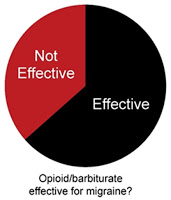 Of the approximate 1.5 million triptan users in the U.S., analysis of adjudicated claims for health care plan enrollees across the United States by IMS Health in 2015 (PharMetrics Plus) estimates 71% of these patients might benefit from an alternative strategy to triptans. This is perhaps because they have conditions or risk factors that contraindicate or warn against the use of these drugs or because triptans are simply ineffective medications. There is also a third set of patients, approximately 11% of prescription-seeking migraine sufferers (~400,000 individuals) according to IMS Health are currently not on triptans for appropriate reasons. In my opinion, these three groups of patients, the triptan-illegible, the triptan-resistant, and the triptan-naive, of which there are well over one million in the U.S., are the low-hanging fruit for CoLucid. 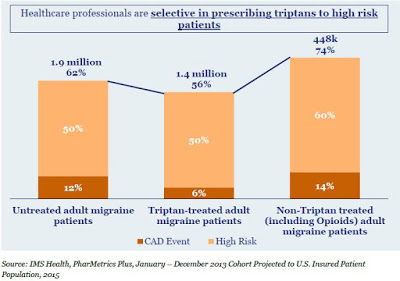 However, beyond the low-hanging fruit for CoLucid exists a fourth subset of patients that is significantly larger than the current triptan market. Based on WHO, U.S. CDC, and IMS Health data, there are approximately 35-40 million individuals in the U.S. who suffer from migraines. Only 1.5 million take triptans. The vast majority of migraine sufferers are medically undiagnosed, untreated, or managing their disease with inferior OTC medications or opioids. CoLucid’s lasmiditan has the potential to capture market share of this treatment-naïve population on par with triptan usage, creating a sizable market opportunity for the company once lasmiditan hits the market.