PURE EP is a Class II medical device designated by the U.S. FDA. As such, FDA approval is possible through a 510(k) application. This means BioSig should not need human clinical data as part of the application to the agency. Proof-of-concept and pre-clinical data exist through the company’s collaboration with UCLA Labs and The Mayo Clinic. In my last article on BioSig, I reviewed very important data presented at the International Dead Sea Symposium (IDSS) by researchers at the Mayo Clinic in March 2016. Investors can view that article here >> LINK
In this article, I thought I would take a look at what BioSig Technologies is worth based on some conservative assumptions of success.

A Little Background On The EP Market

Atrial fibrillation (AF) is the most common form of complex arrhythmia. The rapid, abnormal firing of electrical impulses causes the atria to quiver or beat in a chaotic (irregular) fashion. This causes the ventricles to pump the blood ineffectively throughout the body. According to the American Heart Association (AHA), an estimated 2.7 million Americans are living with AF (1). Untreated AF doubles the risk of cardiovascular-related death and causes a 4-5-fold increase in the risk of stroke (source: AHA). According to the U.S. Center for Disease Control and Prevention (CDC), more than 750,000 hospitalizations and 130,000 deaths occur each year in the U.S. because of AF. AF is the underlying cause for 15-20% of ischemic strokes and costs the U.S. an estimated $6 billion in direct medical expense each year.

When pharmacotherapy to treat AF fails, pacemakers or cardiac defibrillators may be surgically implanted to provide low-energy pulses to the heart to restore rhythm and monitor the heart to prevent sudden cardiac arrest. In the U.S., over 225,000 pacemakers and 135,000 cardiac defibrillators are implanted each year. However, medications or cardioversion to control atrial fibrillation is not always effective. In these cases, a cardiologist may perform a procedure to ablate the area of heart tissue that’s causing the erratic electrical signals to restore the heart to a normal rhythm. Ablation is done by the use of specialized catheters that deliver radiofrequency energy, extreme cold (cryotherapy), or heat to ablate small areas of the heart, either by isolating or destroying the tissue causing the erroneous signal. The procedure corrects the arrhythmia without the need for medications or implantable devices.

Sources estimated between 110,000 and 125,000 AF ablation procedures in the U.S. and Europe each year (2, 3). Unfortunately, recent data published in the JAMA found that radiofrequency catheter ablation procedures had a success rate of only 46% on the first try (4). This is because cardiac mapping the exact tissue to isolate that is causing the erratic electrical signals is difficult. Difficult due to low fidelity or high signal-to-noise ratio of existing EP equipment. This leads to incomplete ablation of the target area, which results in recurring arrhythmia and the potential for a repeat procedure at some point in the future. A poor signal quality might also lead to longer procedure time, adding cost to the hospital and potential detrimental adverse effects on the patient.

The Size of the EP Market

An important aspect of the PURE EP System is that it is designed to be used in conjunction with existing EP recording devices, essentially creating a new category within the market where EP labs can add on the platform without the significant cost of replacing or upgrading the expense technology already in place. It is designed to improve the signal and recording so that analysis at previously undetectable levels can be conducted with high accuracy. This is the key to the BioSig investment thesis, as the company is not competing with industry behemoths Boston Scientific, St. Jude Medical (now part of Abbott Labs), and GE Healthcare, but instead bringing a new product to the market – and EP Information System – that makes interpretation and visualization of challenging signals possible.

According to Global Industry Analysis, the electrophysiology device market will grow at a 12.1% compound annual growth rate, from $2.5 billion in 2012 to $5.5 billion by 2019, making it one of the fastest growing medical device segments (5). Accordingly, the number of catheter ablation procedures done in the U.S. is also expected to see accelerating growth (6). According to Health Research International, the number of catheter ablation procedures on a global basis is expected to reach 160,000 in 2017. 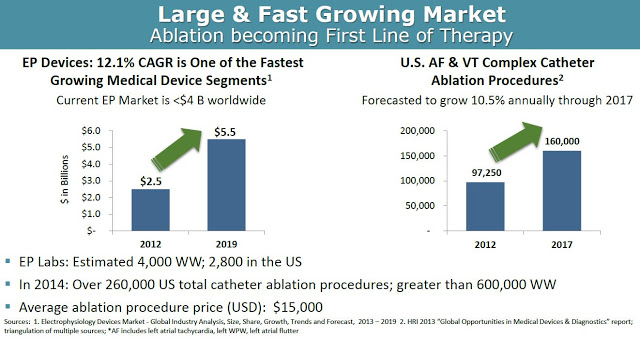 The increase in the number of procedures is taking place at approximately 5,500 EP Labs around the developed world, with approximately 3,500 in the U.S. and 2,000 outside the U.S. It’s a relatively straightforward pitch to these labs for BioSig, or a potential commercial partner like Boston Scientific, Abbott, or GE that already have sizable market share and a vested interest in keeping those very important working relationships with cardiac electrophysiologists.

The major players in this area are using the EP recording systems to get relationships with the EP labs, and then upselling maintenance services, software upgrades, and high priced consumable catheters. BioSig is not making catheters, at least not yet; however, with a superior EP recording device that improves the potential outcome of the procedure, it becomes clear that major players are interested in PURE EP because it helps them sell more services downstream. From a market penetration standpoint, BioSig could see significant uptake of the Pure EP device upon commercialization in 2017 in the hands of the right partner.

As noted above, PURE EP is designed to deliver improved signals and information over the existing already installed equipment, making the product a nice add-on to the expensive systems in place at EP labs across the world. PURE EP might cost $175,000 per install, and 25-30% penetration of the estimated 5,500 EP labs in the developed world is a feasible target. However, I also expect that BioSig will offer both software and hardware upgrades to the installed system, with a useful life of roughly ten years, along with yearly service revenue that sums to total revenue of around $405,000 per system installed over a ten year period.

From a valuation standpoint, BioSig is an estimated 18 months away from revenue generation, with peak sales likely five years later based on PURE EP system installs. This brings the cumulative revenue opportunity over the next 10-15 years to $615 million, with estimates peak revenues of around $150 million. Large medical device players like Medtronic, Boston Scientific, St. Jude, J&J, and Abbott Labs trade at approximately 3.7x projected revenues and 13.6x projected EBITDA (see below).

This target is calculated by applying multiples derived from the industry’s largest players with mature businesses and significantly lower growth rates. It is highly plausible that a company like Abbott, J&J, or Boston Scientific would pay significantly higher than 3.7x peak sales or 13.6x peak EBITDA. After all, Pure EP would be plugged into the existing business at these companies, likely resulting in significantly higher profitability than what a small, standalone company like BioSig could achieve. This is also a fiercely competitive space where 1% market share within the cath lab is worth $30 million. A complementary “bolt-on” type product like Pure EP would be highly coveted and too important to allow falling into a competitor’s hands.