Last week, Allergan plc (AGN) acquired two companies on the same day, both in an effort to strengthen its focus on NASH. Allergan spent $615 million to acquire Tobira Therapeutics, Inc. (TBRA) and $50 million to acquire privately-held Akarna Therapeutics. The acquisition of Tobira gives Allergan cenicriviroc, an oral Phase 3 ready potent inhibitor of the chemokine receptors, CCR2 and CCR5, which are involved in the inflammatory and fibrogenic pathways in NASH and evogliptin, an oral DPP-4 inhibitor in Phase 1 studies for NASH. Allergan also committed to pay shareholders of Tobira another billion dollars in potential milestones upon the successful development of cenicriviroc and evogliptin. The smaller acquisition of Akarna brings in AKN-083, a preclinical farnesoid X receptor (FXR) agonist for the treatment of NASH that Allergan believes is complementary with cenicriviroc and evogliptin.

Allergan’s double acquisition day last week reinforces what investors already know – NASH plays are hot and getting scooped up by big biopharma companies left and right. Many consider Intercept Pharmaceuticals (ICPT) the market leader in NASH, with Gilead Sciences (GILD), Genfit SA (GNFTF), Novartis (NVS), Shire Plc (SHPG), Bristol-Myers (BMY), Merck (MRK), and the aforementioned Allergan all making a strong push into the billion-dollar market. Gilead recently paid $400 million to acquire privately-held Nimbus Therapeutics and its Phase 1 asset, acetyl-CoA carboxylase. In January 2015, Gilead acquired an FXR agonist from privately-held Phenex Pharmaceuticals for $470 million.
The deal flurry in NASH last week caused several small-cap biopharma companies to increase in value as investors speculate on who will be acquired next. Galmed Pharmaceuticals (GLMD), Conatus Pharmaceuticals (CNAT), and Galectin Therapeutics (GALT) all soared on the news. Can-Fite Biopharma (CANF) also popped on the news. Can-Fite is a somewhat under-the-radar NASH play. I’ve written extensively on the name, but tend to focus most of my analysis on CF101, which is Phase 3 ready in both rheumatoid arthritis and psoriasis. For the purpose of this article, I’ll look at CF102 for liver disease, including NASH, an opportunity that I do not believe the market is aware of and has the potential to send Can-Fite shares soaring in 2017.
Quick Background on CF102
Can-Fite’s CF102 is a selective A3 adenosine receptor (A3AR) agonist. Can-Fite is currently studying CF102 as a second-line treatment of advanced hepatocellular carcinoma (HCC), the leading form of primary liver cancer, in subjects with Child-Pugh B cirrhosis. The 78-patient Phase 2 trial is currently recruiting patients in Israel and select countries in southeastern Europe. I’m expecting enrollment to complete in the next few months and for Can-Fite to report top-line data in 2017.
The anti-cancer effects of CF102 are believed to stem from the activation of adenosine, mainly through binding to the A3 receptor (1). The mechanism of action mediated via A3AR agonism includes modulation of key signaling proteins, such as PI3K, GSK-3β, PKA, PKB/Akt, IKβ, and NF-кB, resulting in deregulation of the Wnt and the NF-кB pathways. In 2007, researchers at CanFite found that A3AR is expressed in very low levels in most normal tissues, but overexpressed in a number of different tumor types, including skin, colon, breast, renal, ovarian, and hepatic cancers (2). As such, targeting the A3AR through pharmaceutical intervention is a likely mechanism for apoptosis of cancer and inflammatory cells (3).
HCC is the lead indication for CF102. In fact, Can-Fite has received Fast Track designation for CF102 as a second-line treatment for HCC, as well as been granted Orphan Drug status given the high unmet medical need and lack of effective treatment options for patients failing first-line therapy. HCC is a relatively small market in the U.S., with roughly 40,000 new cases each year (4). The opportunity in Europe looks similar; however, the American Cancer Society estimates more than 700,000 people are diagnosed with HCC cancer each year worldwide, with 450,000 or so in Asia.
I believe there is a meaningful opportunity for Can-Fite to sign licensing and distribution agreements with CF102 in areas like China and Korea. Management has already out-licensed its other clinical-stage candidate, CF101, to Kwang Dong Pharmaceutical in Korea, so this management team has experience partnering with large Korean pharmaceutical companies. They also have experience negotiating term sheets with companies in China and Japan. Licensing deals that provide upfront cash to Can-Fite for CF102 in Asia will help support the U.S. and EU development plans and allow the company to expand CF102 into NASH, which is where I believe the true value of the asset lies.

On November 23, 2015, Can-Fite announced the development of CF102 will be expanded into NASH based on compelling preclinical data. Non-alcoholic steatohepatitis (NASH) is believed to be the next big global pandemic given the soaring rates of obesity, diabetes, and metabolic syndrome all over the world. NASH, also called “fatty liver”, is a condition in which fat builds up in the liver causing inflammation. Prior to the presence of inflammation, the disease is simply referred to as non-alcoholic fatty liver disease (NAFLD), the most common form of liver disorder in the U.S.

The accumulation of macroglobular fat inside the liver causes oxidative stress that reduces the efficiency of the liver and can lead to increased liver enzymes such as alanine aminotransferase (ALT) and aspartate aminotransferase (AST). Loss of liver efficiency and oxidative stress leads to inflammation, liver cell ballooning, and the development of NASH. Prolonged inflammation results in cirrhosis (scar tissue), liver failure, or liver cancer.

Rates of NAFLD and NASH are increasing in the U.S. in concert with increasing rates of obesity and diabetes. In fact, NASH is now the third leading cause of liver transplant in the U.S. According to the U.S. National Institutes of Health, an estimated 15-30% of Americans have fatty liver, with approximately 20% going on to develop NASH. The American College of Gastroenterology estimates 2-5% of adult Americans and up to 20% of those who are obese may suffer from NASH, putting the target population in the country between 5 and 10 million individuals. There are currently no U.S. FDA approved treatment options for NASH.

Preclinical data studying CF102 in a mouse model of liver disease revealed the drug’s capability to improve liver pathology in NAFLD and NASH. The data showed:

– CF102 had a statistically significant reduction in NAFLD Activity Score (NAS) compared to placebo. NAS was developed to provide a numerical score for patients who most likely have NASH. Accordingly, NAS is the sum of the separate scores for steatosis (0–3), hepatocellular ballooning (0–2), and lobular inflammation (0–3), with the majority of patients with NASH having a NAS score of ≥ 5. The CF102 preclinical data shows statistical significance for both the high and low doses. 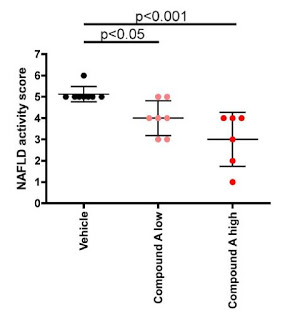 – CF102 reduced liver-to-body weight compared to placebo. Because of the excess accumulation of globular fat and inflammation of the liver, a NASH liver becomes enlarged and heavier than a normal healthy liver. A reduction in liver-to-body weight is evidence of reduced fat and inflammation in the liver and a sign that the drug is the improving disease condition.
– Liver sections from the placebo group exhibited severe micro- and macrovesicular fat deposits, hepatocellular ballooning and inflammatory cell infiltration, whereas the CF102 treated group showed a significant decrease in steatosis, ballooning and lobular inflammation compared to the placebo group.
– CF102 decreased plasma ALT and triglycerides levels in the livers of NASH-model compared to placebo. This is a sign of improved liver function and efficiency. Separate studies with CF102 demonstrated efficacy in the treatment of liver regeneration and function following liver surgery.
– Representative photomicrographs of H&E-stained liver sections showed improved pathology in animals receiving CF102 vs. placebo.

Last week, Can-Fite announced additional preclinical data on CF102 in liver disease was published in Molecular Medicine Report. The paper highlights the regenerative effects of CF102 in a Wistar rat model of ischemia / reperfusion injury. The data show a higher regeneration rate in the CF102 treatment group compared with the control group, suggesting that CF102 had a positive effect on the proliferation of hepatocytes following hepatectomy (Ohana G, et al., 2016).

Ischemia / reperfusion (I/R) injury occurs when the cellular damage of a hypoxic organ is increased subsequent to the restoration of oxygen delivery. Warm I/R injury may arise clinically in hepatic surgery, liver transplantation, hypovolemic shock, and various types of toxic liver injury. These conditions are induced by liver hypoxia and may lead to ischemic hepatitis. Cellular hypoxia leads to the activation of the transcriptional regulatory, NF-кB, which triggers the release of other inflammatory mediators, including activated Kupffer cells and neutrophils, TNF‑α, IL‑1, and nitric oxide (NO) (5, 6). The mechanism of action  of CF102, modulation of the Wnt and NF-кB signaling pathway through activation of A3AR, with downstream effects on PI3K, PKB/Akt, and IKβ reduces liver inflammation and may protect against hypoxia-related injury.

The figure below shows the serum concentrations of two liver enzymes, SGOT and SGPT, were significantly reduced in the CF102 treatment group compared to the control group 48 hours after surgery (P<0.05). This is evidence that CF102 helps prevent cellular injury and apoptosis following liver injury. 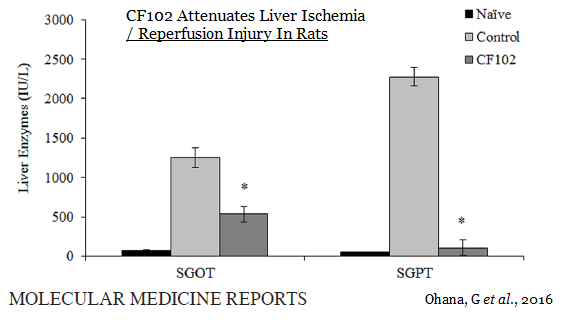 The picture below shows the histological evaluation of liver injury. No signs of necrosis, inflammation, or apoptosis were observed in the naïve liver. In the control group, large areas of necrosis and inflammatory cells were observed by H&E staining. The TUNEL assay revealed an abundance of cells undergoing apoptosis; however, in the CF102‑treated group, no area of necrosis was observed, and only a few inflammatory cells appeared in the liver parenchyma (indicated by the arrows). Only a few cells were undergoing apoptosis in the TUNEL assay. 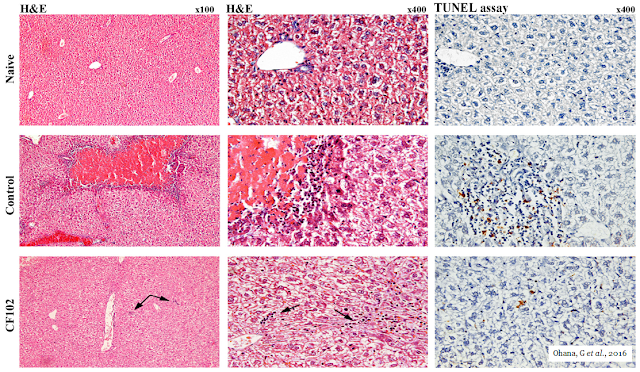 Additionally, hepatic regeneration rates were higher in the CF102 treatment group compared with the saline‑treated control group 48 hours after the hepatectomy. 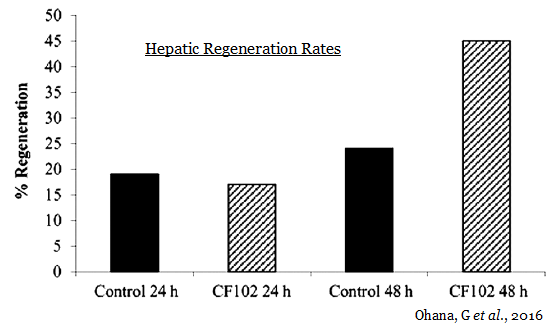 This preclinical data demonstrates that CF102, when administered during liver reperfusion, may attenuate cellular injury, apoptosis, and the extent of necrosis in liver subjected to I/R. Additionally, CF102 stimulated liver regeneration, which favored the survival of hepatocytes during I/R injury. Therefore, the ability of CF102 to protect against hepatic I/R injury may include an anti-inflammatory and an anti-apoptotic effect, combined with an increased rate of liver regeneration.

The mechanism of action for CF102 looks like a pan-hepatic improver of liver pathology, applicable to earlier-stage liver diseases such as NAFLD and NASH, for the treatment of ischemia / reperfusion (I/R) injury in patients following partial hepatectomy, and in the treatment of primary liver cancer, including advanced hepatocellular carcinoma (HCC). Can-Fite anticipates initiating a Phase 2 trial with CF102 in NASH before the end of 2016.

Big pharma has clearly shown a propensity to acquire early-stage assets for the treatment of NASH. Just last week, Allergan paid $50 million to acquire Ankara because the potential exists that its preclinical asset, AKN-083, may have synergistic effects with cenicriviroc and evogliptin. Can-Fite’s CF102 is orally administered, has a novel mechanism of action, and has been shown to be safe and generally well-tolerated in late-stage cancer patients.

Can-Fite’s entire market capitalization is only $36 million and I have to believe that the majority of that value is Phase 3 ready CF101 for the treatment of rheumatoid arthritis and psoriasis. CF102 has the potential to dwarf CF101 if successfully developed for NASH. I think once Can-Fite initiates the Phase 2 study with CF102 in NASH later this year, investors will start to view the story more and more as a “NASH play”, and that should set the stage for a major revaluation higher in 2017.