In July 2016, BrainStorm Cell Therapeutics (NASDAQ: BCLI) reported top-line data from a Phase 2 multi-center study with NurOwn® for the treatment of ALS. The company is currently in the process of finalizing the full data analysis from this trial and plans to submit the results for presentation at a medical conference during the first half of 2017. In the meantime, additional studies are being planned to advance NurOwn into multi-dose and registration trials.

As a reminder, the Phase 2 study investigated the treatment of ALS patients with transplanted autologous mesenchymal stem cells secreting neurotrophic factors (MSC-NTF), known as NurOwn, through both intramuscular and intrathecal injections, but only during a single visit at the start of month three. The diagram below shows the trial design – recruitment, bone marrow aspiration, transplantation, and then follow-up evaluation visits. This is important because, after a single treatment with NurOwn, I believe the results are quite impressive.

It’s also important to note that patient recruitment took place at three prominent hospitals in the U.S.: Mayo Clinic in Rochester, Minnesota, Massachusetts General Hospital in Boston, MA, and the University of Massachusetts in Worcester, MA. A total of 48 patients were randomized, 36 to NurOwn and 12 to placebo. Keep in mind, Mayo Clinic is currently ranked as the No. 1 hospital in the U.S. for Neurology by the U.S. News & World Report (1). MGH is ranked No. 4. This was no fly-by-night operation. BrainStorm is working with the nation’s thought leaders in ALS and this inspires confidence in the story.

At nine months (end of study), NurOwn was shown to be safe and well tolerated. This was the primary endpoint of this study. In terms of efficacy, in the intent to treat (ITT) population, a higher percentage of NurOwn-treated patients were deemed to be responders compared to placebo, at all except one time point studied out to 24 weeks. Moreover, it appears that the strongest therapeutic effect was achieved in those patients whose disease was progressing the fastest, a group that comprised approximately half of the subjects in the study.

I find this extremely interesting from both a scientific and commercial standpoint because many physicians will make a determination the use of NurOwn based on the risk/reward for their patients. The observation that the sickest and most desperate patients appeared to have benefited the most should motivate physicians to use NurOwn. Most therapeutic products used to treat serious diseases have the opposite effect, healthier patients see a benefit but those deemed “too far gone” are relegated to palliative care.

The other interesting observation from the Phase 2 top-line data presentation (see the slide deck) was that there was some evidence for a more pronounced benefit taking place in the first four weeks. Statistically significant separation from the placebo was evident at multiple timeframes over the 24-week study, but the largest number of responders was seen earlier in the trial. 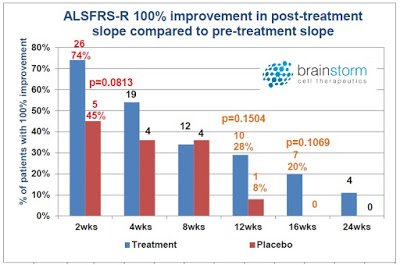 I’ve heard some investors question the utility of NurOwn because they mistakenly believe there is waning efficacy after the first months post-treatment. My response is that this criticism is premature, given that the study was designed to investigate the benefit of NurOwn after only a single dose. Pharmaceuticals for serious chronic diseases typically require multiple treatments in order to achieve a sustained benefit. Lipitor®, for example, the best-selling pharmaceutical product the world has ever known, requires daily dosing, and if patients stop, their cholesterol is likely to rebound. Humira® is the current best-selling drug in the world and it is typically dosed for six to eight months. Even Gilead’s Harvoni®, a cure for HCV infection, takes twelve weeks of daily dosing in order to achieve full efficacy.

It is illogical to assume that one shot of NurOwn is going to cure ALS. In fact, I think it is a very good sign that BrainStorm saw not just a slowdown in disease progression but patient improvement – yes, some patients slope did trend positive post-treatment. Of the various responder analyses conducted by the company, one of them looked for 100% improvement in slope post-treatment versus pre-treatment. This is essentially either disease stabilization or improvement – after only a single dose!

The Future Is Multi-Dose

In January 2016, BrainStorm announced its intentions to conduct a Phase 2 multi-dose trial in up to 24 patients who will receive three consecutive stem cell transplantations of NurOwn. The two subsequent follow-on injections on a monthly or bi-monthly basis could extend the therapeutic effect seen in the recently completed Phase 2 trial and provide a longer-lasting benefit to patients. This has the potential to do what no pharmaceutical company has been able to do to date, i.e. improve overall survival and turn ALS into a chronic disease, rather than the death sentence that it is for most patients today.

However, based on the strong Phase 2 single-dose data, the company is currently considering the possibility of increasing the number of patients and participating clinical sites in this trial in order to increase the statistical power of the study. The advantage of a higher sample size would be that, if NurOwn shows a clinical benefit in ALS patients, there is a better probability for an efficacy outcome that is statistically significant.

Management is currently preparing to submit a protocol design for a Phase 2/3 study to various regulatory agencies, including the U.S. FDA and the Israeli Ministry of Health. The goal is to conduct planned multi-dose study on a global basis, as well as expand the number of patients to be recruited, potentially allowing for positive results to be part of the NurOwn registration package. Even with an increase in enrollment, I believe BrainStorm has enough cash to initiate this planned Phase 2/3 study in the next few months.

Following release of the top-line data in July 2016, BrainStorm’s stock spiked to nearly $4.00 per share, up over 100% from the previous lows set in May 2016. This was an appropriate reaction, as the data were quite good and the stock, by my calculation is undervalued relative to peers. However, the spike was followed by an immediate sell-off and the likely reason was that investors feared a massively dilutive offering. 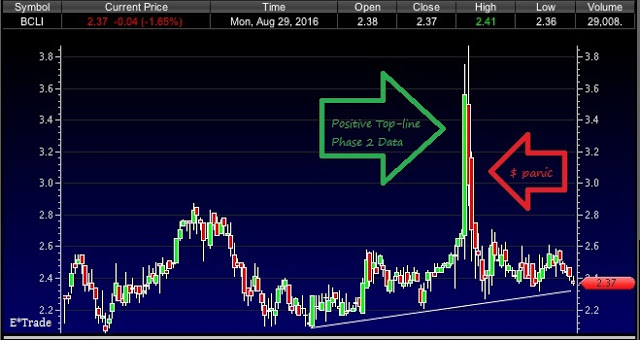 The company has been careful about unnecessary dilution in the past, and insiders currently own 15% of the company, so I think this fear is ungrounded. I’m also baffled by mistaken concern by some investors that BrainStorm is running low on cash.

As of June 30, 2016, BrainStorm reported $11.4 million in cash and investments. Loss for the second quarter totaled $0.96 million and loss for the first six months of the year was only $2.75 million. Operating cash burn for the first six months of the year totaled $4.39 million, or approximately $0.75 per month. The company was awarded a $1.5 million grant from the Israeli Office of the Chief Scientist (OCS) earlier in 2016 that has helped reduce burn by approximately $0.78 million so far in 2016. Management has been successful in the past in bringing in non-dilutive capital through grants. Since 2007, it has received $6 million in non-dilutive grant and research funding.

At the monthly burn rate of only $0.75 per month, the company has cash until at least September 2017! Yes, the burn rate will likely increase in the fourth quarter once the multi-dose study gets underway. However, as noted above, the company has enough cash to initiate this program; and, I expect cash burn here in the third quarter while the company is in-between studies to be well below that of the first and second quarter. My point is that fears over the cash position are greatly exaggerated.

BrainStorm stock is looking extremely interesting to me at this level. The recently reported top-line data from the Phase 2 ALS program with NurOwn demonstrated clear proof-of-concept and a follow-on Phase 2 multi-dose program is about to get underway. I think the next steps will be very interesting because if BrainStorm can succeed in turning ALS into a chronic disease through multiple maintenance doses of NurOwn, they are sitting on a blockbuster.

In the meantime, the initiation of the Phase 2/3 program and the presentation of the full Phase 2 data in 2017 have the potential to act as catalysts to drive the – meaningfully undervalued – shares higher. Investor concerns over an imminent massive dilutive offering are misguided. BrainStorm will likely need cash over the next year, as will the majority of small-cap biopharma companies, but the company looks to have an adequate runway and some flexibility today. This is a name worth taking a serious look at.