On December 14, 2015, Immune Pharmaceuticals (IMNP) provided a brief update for investors on the status of its preclinical bi-specific antibodies platform. As a reminder, outside of the lead immuno-inflammation focus with Phase 2 Bertilimumab for Bullous Pemphigoid and Ulcerative Colitis, Immune has a preclinical immuno-oncology program that consists of NanomAbs and bi-specific antibodies.

Investors may not be familiar with Immune’s immuno-oncology division. The lead candidate here is a trastuzumab-conjugated nanoparticle paclitaxel in late pre-clinical development; however, Immune, in collaboration with a consortium of leading European research centers, is also developing a novel platform for the production of tetravalent IgG1-like bi-specific antibodies (bsAb). This work is funded by a European grant and lead by Dr. Jean Kadouche, PhD, a scientific co-founder of Immune Pharmaceuticals.

Quick Background
Initial findings from this work were presented in poster form at the IBC Antibody Engineering & Therapeutics Conference in San Diego, CA, by Dr. Boris Shor, Ph.D., Immune’s executive director of R&D. Dr. Shor joined Immune in September 2015. He current leads the company’s immunology research laboratory at the Alexandria Center for Life Science in New York City. I’m intrigued by the work that should come out of Immune’s lab in NYC because Dr. Shor joined the company from the Pfizer Oncology Research Unit where he led internal and external collaboration project teams to develop novel antibody-drug conjugates (ADCs) for the treatment of cancer.

Immune has developed a prototype HLA-DRx-CD5 bi-specific antibody construct consisting of tandemly arranged Fab fragments where the CH1 domain of an outer anti-HLA-DRF antibody fragment is fused to the N-terminal end of the VH domain of the following anti-CD5F antibody via a peptide linker. The correct pairing of the light chains and their cognate heavy chains was optimized by introducing two sets of mutations at the CH1-CL interface of the inner anti-CD5 Fab. Further modification of the hinge region between two Fabs allowed generation of bi-specific antibodies with potentially more flexible structure, where, for example, both arms can target the tumor cell or one can target the tumor cell and the other can target T-Cells. 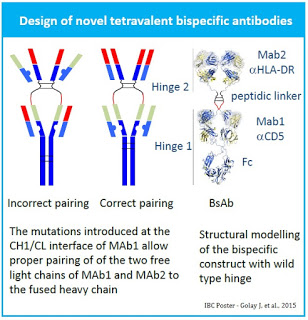 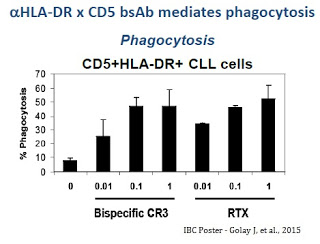 The newly developed platform will be further used to generate novel bi-specific antibodies against immune-oncology targets. The data above from the prototype molecule was designed to show platform validation and technology proof-of-concept. I suspect that the poster presented at IBC is just the initial data we will see on the platform and that additional data is coming via peer-reviewed papers in 2016. Nevertheless, Immune plans to develop a number of new candidates and then expeditiously move them through lead optimization and candidate selection for potential U.S. IND applications.

The upside for Immune shareholders is the signing of potential development partnerships with large pharma organizations. Bi-specific antibody platforms have been a hot area for big pharma/small-biotech deals in 2015. For example, Adimab signed several major deals in 2015 with companies including Kite Pharma, Celgene, Glaxo, and Sanofi for its bi-specific antibody platform. Other notable deals in 2015 included Celgene-Zymeworks, Baxalta-Novimmune, and Amgen-Xencor. The Amgen-Xencor deal included $45 million upfront and potentially as much as $1.7 billion on the back end. Just last week, Roche signed a deal with Pieris Pharma for immune-oncology discovery utilizing Pieris Anticalin platform. The deal included $6.5 million upfront and potentially $409 million on the back end. Based on data obtained from EvaluatePharma, big pharma is paying an average of $49 million upfront for licensing of bi-specific antibody platforms.

Conclusion
Immune’s entire pipeline looks vastly under-valued by the market. Beyond bertilimumab, which I’ve written extensively on in the past (see my article on bertilimumab for BP and bertilimumab for UC), the company has a novel nano-formulation of cyclosporine-A, and a two separate preclinical immuno-oncology platforms, NanomAbs and bi-specific antibody production. The current market value of only $22 million is bafflingly low given the upside potential for these programs, and the news above shows that the company’s internal R&D effort is capable of developing potential novel blockbuster drugs in immuno-oncology, arguably the hottest area of biotech right now.