Over the past several months, Immune Pharmaceuticals (IMNP) has aggressively expanded its efforts in oncology. The company has a two-fold strategy with its oncology pipeline, develop a platform of next-generation nanoparticle cytotoxic agents and bispecific antibodies, and resurrect legacy drug candidates acquired via the company’s acquisition of EpiCept in late 2013. If successful, Immune’s desire to expand into oncology will help provide diversification and potential upside to the core inflammatory-focus with lead product candidate, bertilimumab, for ulcerative colitis and bullous pemphigoid.

Management has made it clear that they are pursuing independent funding for the oncology division, with the ultimate strategy to create a jointly owned subsidiary to expand Immune’s focus from immuno-inflammation into immuno-oncology. Below is a quick update on some of the recent news out of Immune with respect to these efforts.

Immuno-oncology is a relatively new focus for Immune, so it is not surprising to see the company make a significant number of key hires over the past six months. The division is being headed up by Dr. Miri Ben-Ami, MD, Immune’s new EVP and head of Oncology. Dr. Ben-Ami joined Immune in November 2015. Also in November 2015, Dr. Monica E. Luchi, MD joined as the company’s Chief Medical Officer. In September 2015, Dr. Boris Shor, Ph.D., joined Immune to head up the research laboratory at the Alexandria Center for Life Science in New York City. Dr. Shor joined the company from the Pfizer Oncology Research Unit where he led internal and external collaboration project teams to develop novel antibody-drug conjugates (ADCs) for the treatment of cancer.

Also in December 2015, Immune further strengthened its efforts in bispecific antibodies with the licensing of technology and patents from Atlante Biotech SAS, a privately-held European biotech company that was part of a European consortium working with Immune on the initial bispecific antibody prototype noted above. Work at Atlante Biotech SAS was lead by Dr. Jean Kadouche, a scientific co-founder of Immune Pharma. The technology in-licensed by Immune expands the company’s platform to target immune checkpoint inhibitors and will help the company generate additional preclinical data with selected bispecific drug candidates in 2016. By licensing the technology and patents from Atlante Biotech SAS, Immune’s will now be able to develop bispecific antibody constructs targeting multiple immune checkpoint inhibitors.

In March 2016, Immune announced the publication of preclinical data in Immunology. The new publication demonstrates the company has designed and validated a novel generic platform for the production of tetravalent IgG1-like chimeric bispecific Abs (Golay et al., 2016). The company’s goal for 2016 is to complete initial validation of several bispecific antibody candidates for further development based on internal R&D efforts and seek new intellectual property protection for these discoveries. For example, Immune has initiated several bispecific antibody discovery programs. The first program targets two immune-checkpoints, PD-1 and Ox40, and the second program targets one immune checkpoint, PD-L1, and one tumor-associated antigen, BCMA, a specific marker of multiple myeloma. A third program targets undisclosed antigens.

Immune’s NanomAbs® are next-generation nanoparticles, which contain thousands of cytotoxic molecules and are conjugated to monoclonal antibodies that recognize specific targets (antigens) in order to enhance the nanoparticles’ specificity, stability, and therapeutic efficacy. The company has created a platform with a goal to provide a more efficient approach for tumor-specific delivery of cancer therapeutics and immunomodulatory agents.

The platform allows for a variety of small molecules, peptides, or proteins to be chosen based on sensitivity to cytotoxic agents and delivered inside a nanoparticle formulation. Similarly, the highly targeted monoclonal antibody conjugated to the nanoparticle can be chosen based on tumor antigens, and the company has already prioritized the development of several immune checkpoint inhibitor-targeted NanomAbs. This is an area gaining significant scientific validity over the past year. For 2016, the company’s goals are the validation of manufacturing processes and the generation of preclinical proof of concept data.

Ceplene is a drug Immune acquired in 2013 with the takeover of EpiCept. Until recently, Ceplene sat on the back-burner at Immune, but recent data has piqued the interest of management and now it seems as though there is a potential to monetize Ceplene through a partnership, or at the very least include the drug in the planned oncology subsidiary once formed. Keep in mind, Ceplene® has been granted orphan drug status for the treatment of AML by the European Medicines Agency (EMA) and the U.S. Food and Drug Administration (FDA).

Ceplene (histamine dihydrochloride) is approved in Europe and Israel and in late-stage development in the U.S. Phase 3 data with Ceplene used in combination with interleukin-2 (IL-2) demonstrated an improvement in leukemia-free survival (LFS) in patients with acute myeloid leukemia (AML). Specifically, complete remission patients in the post-consolidation phase of treatment for AML receiving Ceplene + IL-2 achieved a 3-year LFS rate of 40% vs. only 26% for a no treatment control (Brune et al., 2006). Keeping AML patients in remission post-consolidation is a major challenge, so Immune plans to further explore the potential for a combination Ceplene+IL-2 formulation in 2016.

For example, Immune recently performed a new multivariable analysis of a Ceplene/IL-2 Phase 4 study (NCT01347996) conducted in Sweden. The company believes it has identified new potential biomarkers that predict response to Ceplene + IL-2 in patients in complete remission and post-consolidation phase of treatment. Immune will be presenting a poster of this data at the upcoming 2016 American Association for Cancer Research (AACR) annual conference to be held April 16-20 in New Orleans (Immune’s poster will be presented on April 17th). The company has published an abstract of the data highlighting these reported predictors of clinical outcome and identified certain biomarkers that improvement in LFS for patients with low relapse risk AML. 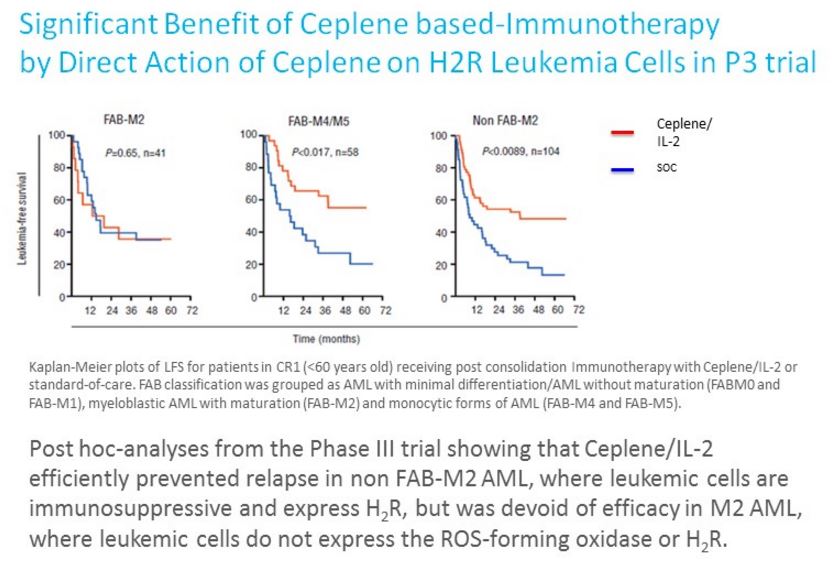 As noted in my previous article highlighting the catalysts for Immune in 2016, management is focused on creating a private subsidiary to further fund these immuno-oncology programs, which include all efforts with NanomAbs, bispecific, Ceplene, and other legacy assets, Azixa and Crolibulin. EpiCept did not have the cash or expertise in immuno-oncology to advance these candidates along this path. Over the past few months, Immune has brought in this talent with the hiring of Dr. Ben-Ami, Dr. Luchi, and Dr. Shor to create an oncology division that rivals the company’s efforts with bertilimumab in immuno-inflammation.

However, Immune would like to fund these development efforts without further diluting current shareholders stake in bertilimumab; hence, the formation of a private subsidiary. Immune plans to give up a small ownership stake in the immuno-oncology division in return for non-dilutive funding to complete the preclinical and planned clinical work noted above, all the while continuing to keep the focus of the parent organization on the lead asset, bertilimumab.