Last week, shares of Immune Pharmaceuticals (IMNP) spiked in response to Jazz Pharma’s acquisition of Celator Pharma for $1.5 billion. Celator is developing VYXEOS™, a liposome injection of cytarabine + daunorubicin for patients with high-risk (secondary) acute myeloid leukemia (AML). Back in March 2016, Celator announced Phase 3 data showing its formulation to be vastly superior to the standard of care regimen of cytarabine + daunorubicin, known as “7+3”. In my opinion, VYXEOS will become the new standard of care for induction therapy in patients with high-risk AML. Jazz’s take-out of Celator at nearly 100% premium has brought significant investor interest to the AML space.

Over the past few months, Immune has been highlighting new analyses of data with Ceplene® hinting at a potential path forward for the drug. Ceplene (histamine dihydrochloride) is administered in conjunction with low dose interleukin-2 (IL-2) for maintenance of remission in patients with AML following successful induction therapy. In theory, these are patients (or future patients) that achieve complete remission (CR) using VYXEOS but are ineligible for a “curative” bone marrow transplant (BMT) or still considered high-risk for relapse post-consolidation or post-BMT.

Investors briefly turned their enthusiasm for AML stocks to Immune early last week. Whether or not the spike in Immune Pharma shares was warranted is the subject of an article on Seeking-Alpha by Tom Mathies (see article HERE). In short, the author does not believe Ceplene has a viable future. However, I’ve studied some of the recent data that Immune has presented, including a new post hoc analysis from the Phase 3 trial and new data biomarker response analysis presented at the American Association for Cancer Research (AACR) Annual Meeting in April 2016, and I think there are some key points worth mentioning about Immune’s Ceplene strategy.

There are currently no treatment options available to post-consolidation / post-BMT AML patients that remain high risk for relapse. A Phase 3 study conducted by EpiCept Corp., which was acquired by Immune in 2013, demonstrated that use of Ceplene plus interleukin-2 (IL-2) extends Leukemia-Free Survival (LFS), but not Overall Survival (OS) in these patients (1).

The data were strong enough to gain approval for Ceplene in Europe in October 2008 under Exceptional Circumstances (2). As part of the agreement, EpiCept agreed to perform two post-approval clinical studies. One of the studies must further elucidate the clinical pharmacology of Ceplene by assessing certain biomarkers in AML patients in first remission. The other study must assess the effect of Ceplene + IL-2 on the development of minimal residual disease in the same patient population. EpiCept out-licensed the rights to Ceplene to Meda AB in January 2010 (3).

The U.S. FDA, however, did not agree the data were strong enough for approval. In August 2010 the FDA refused to accept EpiCept’s New Drug Application (NDA) for Ceplene (4), noting that the data were insufficient for review. The agency then further noted that to gain approval for Ceplene in the U.S., a significant benefit in OS must be demonstrated for Ceplene + IL-2 compared to IL-2 monotherapy. This should be the primary endpoint of the U.S. Phase 3 study, with LFS as the secondary endpoint (5).

Immune stated in April 2014 that the company had no plans to advance the drug in the U.S.; however, when new data became available from the EU-based Phase 4 MISSION trial (6), it piqued management’s interest at Immune. Then, when a post hoc analysis of the Phase 3 data became available, Immune Pharma decided it was time to re-engage business development activities on the drug. Keep in mind, Ceplene is protected by Orphan Drug designation in Europe until 2018 and in the U.S. seven years post-approval.

Recently, Immune has presented new data from a post hoc analysis of EpiCept’s Phase 3 clinical study with Ceplene. Again, this was the 320-patient study in which Ceplene + IL-2 demonstrated an improvement in LFS but not OS. AML patients can be stratified by the French, American, British (FAB) classification system. The post hoc analysis was designed to delve into the individual patient response to Ceplene + IL-2 by AML subtype. FAB classifies patients as M0 through M7 based on features of red cells, platelets, or white cells, in addition to myeloblasts or promyelocytes. It has been used in the U.S. since the late 1970s.

The post hoc analysis shows that Ceplene + IL-2 efficiently prevented relapse in non-FAB-M2 subtype AML, where leukemic cells are immunosuppressive and express the histamine 2 receptor (H2R), but was devoid of efficacy in M2 subtype AML, where leukemic cells do not express the ROS-forming oxidase or H2R. The Kaplan-Meier plots for LFS can be seen below in which FAB classification was grouped as AML with minimal differentiation/AML without maturation (FAB-M0 and FAB-M1), myeloblastic AML with maturation (FAB-M2), and monocytic forms of AML (FAB-M4 and FAB-M5).

The data show a significant increase in the odds of LFS for patients with non-FAB-M2 AML. Management at Immune believes this relates to the mechanism of action for Ceplene, histamine dihydrochloride, on immune modulation. Again, FAB-M2 AML leukemic cells are devoid of the H2 receptor, the target of Ceplene with NADPH/NOX2 oxidase active (seen in the cartoon below). 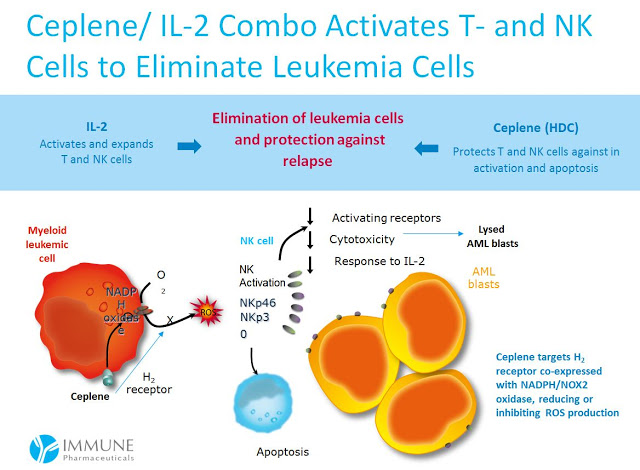 These data suggests a viable path forward for Immune, should they be successful in partnering Ceplene for future development in the U.S., would be to specifically target patients with non-FAB-M2 subtype AML. This presents the best chance for a U.S. Phase 3 study in demonstrating an improvement in OS given the strong response on LFS. There is a precedent for using different treatment regimens for the various AML FAB subtypes (7), so targeting non-FAB-M2 patients is something I think physicians would understand and apply without hesitation.

At the AACR annual meeting in April 2016, researchers out of Sweden presented data on the Phase 4 MISSION trial, designed to assess the immunomodulatory properties of Ceplene + IL-2, and to correlate potential biomarkers with clinical outcome. From MISSION, investigators found a reduction in the frequency of CD8+ T effector memory (TEM) cells during the first cycle of Ceplene + IL-2 prognosticated leukemia-free survival (LFS) (HR 0.25, P=0.001) and overall survival (OS) (HR 0.24, P=0.009). Similarly, induction of T effector cells (TEFF) during the first cycle also impacted favorably on patient outcome (P=0.048 for OS) 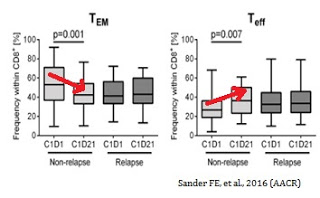 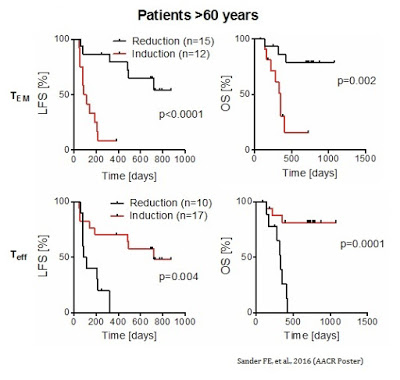 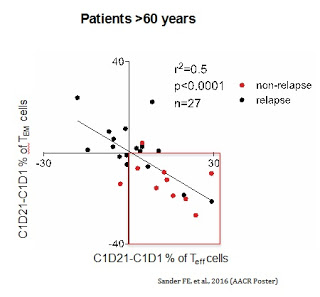 Thus, the altered distribution of cytotoxic T cells during the first cycle (21 days) treatment with Ceplene + IL-2 significantly prognosticated LFS and OS, especially within the group of elderly patients. The biomarker data presented at AACR suggests an interesting potential personalized approach to monitoring patient response to the drug and finding those who are most likely to benefit from Ceplene + IL-2 maintenance therapy in AML.

Where Does Immune Go From Here?

The three most logical questions to ask now with respect to Ceplene are:

1) What are historical OS data for AML patients stratified by FAB subtype?

This is a bit difficult to answer because I could not find substantial peer-review on this subject. Most of the data was anecdotal or incomplete. However, M0 subtype notwithstanding, the probability of OS or LFS is consistent among most patient subtype. For example, work presented at the 54th annual meeting of the American Society of Hematology in 2012 showed similar rates for OS and LFS for all FAB subtypes of AML, excluding M0 and M7, which have a lower probability of OS and LFS (9). The authors of this paper concluded that FAB type does not provide prognostic information for AML.

This data suggests that targeting different subtypes of AML for a randomized, controlled clinical trial – for example, all non-FAB-M2 subtypes – is a viable strategy. It also suggests that Immune’s explanation on why/how Ceplene + IL-2 was able to demonstrate the strongest improvement in LFS in non-FAB-M2 AML patients is due to the mechanism of action and not by chance.

2) What percent of AML patients are Non-FAB-M2?

This was significantly easier to find. Cancer Research UK states that M0, M1, and M2 make up roughly 45% of all AML cases. FAB subtypes M4 and M4eos account for about 25% of AML cases, with M3 and M5 each making up another 10%. M6 and M7 are considered rare, making up the remaining 10% combined (10). I was able to find several peer-review papers referencing the incidence rate for AML by FAB subtype. I’ve presented these in the table below.

I’d caution investors on placing too much emphasis on these individual numbers, but taken as pooled analysis, I think it is a safe assumption to model non-FAB-M2 AML making up roughly 75% of the total AML market. According to the NIH (SEER) data, there will be roughly 20,000 new cases of AML in the U.S. in 2016; it’s fair to say 15,000 of these are non-FAB-M2 subtypes.

3) How can physicians use the biomarker data to treat patients?

The biomarker data (i.e. the ability to predict patient response to Ceplene + IL-2 after the initiation of therapy) are equally as intriguing as the ability to pre-screen patients for enrollment in a clinical trial or before initiation of maintenance therapy. These data provide a potential personalized approach for treating high-risk AML patients. Keeping AML patients in remission post-consolidation is a major challenge. As of today, there are no approved therapies available to post-consolidation / post-BMT AML patients that remain high risk for relapse, and no approved therapies to monitor patient response to existing maintenance medications post-induction or post-consolidation.

Once Ceplene + IL-2 is being used to treat AML patients, oncologists can analyze T cell phenotypic expression before and after the first cycle of looking for an increase in TEFF cells and a reduction in TEM cells. With confirmed response, patients can be kept on Ceplene + IL-2 therapy. Lack of predictive response can also be identified if the T cell expression does not correlate to the ideal altered distribution, and those patients can be moved to alternative medications. This is something I think both physicians and payers will be very interested in.

As noted above, I believe VYXEOS will become the new standard of care for patients with high-risk AML that can tolerate induction therapy. Last week, I wrote an article on Actinium’s Actimab-A and the very exciting data with respect to patient response and peripheral blast burden. As a remind, Actinium’s Actimab-A is an induction therapy for older AML patients that cannot tolerate standard 7+3 or VYXEOS.

I do not know if Immune will be successful with Ceplene. Step-1 is to find a development partner because moving Ceplene into Phase 3 will be an expensive venture. The author on Seeking-Alpha last week is obviously on the pessimistic side, but not incorrect when stating, “Significant hurdles stand in the way of a Ceplene partnership.” I thought I’d write this article to at least explain the company’s strategy in the face of this pessimism.

Immune Pharma is currently working with KOL’s and principal investigators to design a Phase 3 trial in-line with the U.S. FDA’s guidance issued to EpiCept back in 2011. It is possible that management may be able to convince the agency to look at event-free survival (EFS) as a surrogate endpoint for OS. There is growing KOL momentum in this area (11) given the significant unmet need for new treatment options in AML. For example, I saw the following slide posted on Twitter from ASCO on Sunday, June 5th: 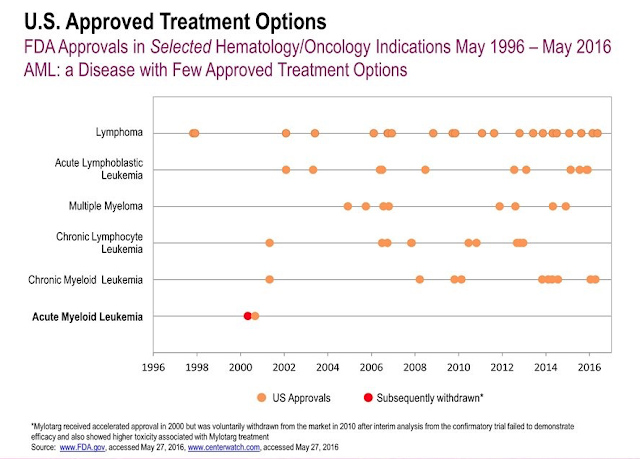 For Immune, the strategy is to target patients with non-FAB-M2 AML or specifically FAB M4/M5 AML. This personalized medicine approach is consistent with Immune’s corporate focus and the bertilimumab program; it also presents the best odds of success for a Phase 3 trial. Plus, it’s still a sizable portion (~75%) of the AML market. I think that will resonate well with potential pharma partners, assuming they get FDA blessing on the protocol.

I would not be surprised to see a potential partner seek to acquire the EU rights to Ceplene from Meda AB as well. Immune has been seeking new patents designed to protect the asset beyond the expiration of EU Orphan Drug status in 2018 (12). I global partner would be the dream scenario for Immune as the company would obtain funding to advance Ceplene to its peak potential. What that peak potential is, remains to be seen.