Last month, Actinium Pharmaceuticals Inc. (NYSEMKT: ATNM) announced the initiation of a Phase 2 clinical trial of Actimab-A in patients newly diagnosed with Acute Myeloid Leukemia (AML) who are over the age of 60. Elderly patients with AML face poor prognosis and have limited viable treatment options. it is an area of significant unmet medical need. Actimab-A, Actinium’s most advanced alpha particle immunotherapy (APIT) program, consists of the CD33 targeting monoclonal antibody, lintuzumab, and the alpha-emitting radioisotope, actinium-225.

Several biopharma companies are working on therapeutic agents for AML that target CD33, including Amgen, Bayer, Boehringer Ingelheim, and J&J. However, only Actinium and Seattle Genetics (SGEN) have progressed beyond Phase 1 studies. For the purpose of my article today, I will look at Actimab-A compared to SGEN’s SGN-CD33A.

CD33 is a transmembrane receptor leukocyte antigen primarily expressed on cancer cells of myeloid lineage, although it can also be found on some lymphoid cells. Regardless of age, risk factors, or underlying mutational heterogeneity, CD33 is consistently expressed in nearly 90% of patients with AML (1). It is a clinically and commercially validated target for monoclonal antibody therapeutics. As noted above, several biopharma companies are targeting CD33 for the treatment of AML.

Pfizer’s Mylotarg® (gemtuzumab ozogamicin) was an anti-CD33 murine antibody conjugated to the chemotherapeutic agent, calicheamicin hydrazide. Mylotarg demonstrated success in mid-stage clinical trials (2), earning Pfizer accelerated approval from the U.S. FDA for the drug in 2000; however, safety concerns and lackluster post-approval trials ultimately led to the drug being withdrawn from the market in 2010 (3).

Lintuzumab is a humanized monoclonal antibody originally developed by Seattle Genetics with ties back to Memorial Sloan Kettering Cancer Center (MSKCC). SGEN attempted to develop lintuzumab as a treatment for AML and other myeloproliferative diseases, but a Phase 2b clinical trial failed to demonstrate an increase in overall survival and the program was discounted in 2010 (4). SGEN is back in late-stage trials with SGN-CD33A, a modified form of lintuzumab now called vadastuximab conjugated to the cytotoxic DNA binding agent, pyrrolobenzodiazepine.

SGN-CD33A – SGEN’s CD33 2.0 Strategy
SGN-CD33A is an engineered antibody-drug conjugate (ADC) designed to deliver the cytotoxic agent pyrrolobenzodiazepine (PBD) dimer to myeloid leukemic cells. The antibody portion, vadastuximab, has engineered cysteines (EC-mAb) that link to the PBD dimer. Just like lintuzumab, vadastuximab binds to the CD33 protein on the myeloid leukemia cell, causing the complex to be internalized and trafficked to the lysosome. Once inside the cancer cell, PBD is released and binds to specific sites on the cellular DNA. This cross-linking blocks the cancer cells division without distorting its DNA helix, thus potentially avoiding the common phenomenon of emergent drug resistance.

Seattle Genetics is studying SGN-CD33A in combination with hypomethylating agents (HMAs) such as decitabine or azacitidine. HMAs are considered a standard treatment for elderly patients with AML. In fact, the primary goal of SGEN’s Phase 3 CASCADE study is to test whether patients treated with an HMA (either decitabine or azacitidine) in combination with SGN-CD33A will survive longer than patients treated with an HMA alone. It’s a plausible hypothesis because HMA’s increase the cell surface density of CD33 expression and should increase the binding of PBD to DNA inside the leukemia cell.

– Some Areas Of Concern

I see some potential areas of concern around SGN-CD33A. The first is the potential safety of the drug. The company’s Phase 1b dose-escalation program initiated in late 2014 tested 5 mcg/kg to 60 mcg/kg of SGN-CD33A. Results with the 40 mcg/kg cohort showed encouraging antitumor activity, with an impressive 77% demonstrating a 50% or more reduction in bone marrow blasts (5). However, treatment-related adverse events were common and included fatigue (57%), thrombocytopenia (53%), nausea (49%), febrile neutropenia (45%), and anemia (42%). The most common Grade 3 or 4 treatment-emergent adverse events occurring in 20% or more of patients were febrile neutropenia, thrombocytopenia, neutropenia, anemia, and fatigue.

While safety analyses with SGN-CD33A in combination with HMAs are still ongoing, Seattle Genetics has pushed into a Phase 3 program called CASCADE. The dose being studied in the Phase 3 trial is only 10 mcg/kg. The 10 mcg/kg dose was towards the bottom of the range tested in early-stage studies, suggesting that doses above this level may be intolerable.

Now perhaps SGEN just thinks its drug is powerful enough that doses above 10 mcg/kg are not necessary, or perhaps management suspects that the use of HMAs, which have been shown to increase the cell surface density of the CD33 transmembrane receptor, will increase the effect of the drug. This is the same strategy that Boehringer Ingelheim is deploying with its CD33 targeted ADC, BI-836858.  But this greatly narrows the potential target population for the drug because patients that have previously failed HMAs for antecedent myelodysplastic syndrome (MDS) are ineligible for SGN-CD33A.

There are only 20,000 new cases of AML in the U.S. each year (6). Roughly 25% of these cases will be secondary AML arising from preleukemic disorders such as MDS or myelomonocytic leukemia (7). HMAs are the standard of care for MDS patients. Prior treatment with an HMA precludes enrollment in the CASCADE study. However, for SGN-CD33A to be truly effective at 10 mcg/kg, it must be used with an HMA. It is illogical to assume that oncologists will treat newly diagnosed AML patients with a drug they have already failed for antecedent malignancies.

Actimab-A has shown a promising safety and efficacy profile thus far that I believe differentiates the drug from other CD33 targeting drug candidates.  The concept of Actimab-A holds significant scientific merit. We know CD33 is a commercially validated target by the approval of gemtuzumab. Lintuzumab by itself has proven to be ineffective; but, linked to the short-ranged (50-80 µm), high-energy (~100 keV/µm) alpha particle–emitting radioactive isotope Ac-225, Actimab-A should see a powerful increase in cancer cell-killing effect.

Use of Actimab-A does not require concomitant treatment with an HMA. This is likely because the toxicity of Ac-225 far exceeds pyrrolobenzodiazepine (PBD) in the tumor microenvironment. For example, for PBD to be effective it must be trafficked inside the cancer cell in sufficient enough concentrations to interfere with DNA replication. This is why HMAs are necessary for SGN-CD33A’s effectiveness. HMAs increase the cell surface expression of CD33, which is the door that SGN-CD33A uses to get inside the cell.

Actimab-A needs no such door. Ac-225 is a powerful enough radioactive isotope that it can effectively kill the leukemia cell by proximity. Actimab-A is dependent on the CD33 receptor to bind to the leukemia cell, but single atoms of Ac-225 are powerful enough to cause cell apoptosis. There is no need to boost CD33 cell surface expression to achieve sufficient cellular concentration. This potentially limits off-target side effects from over-expression of CD33 on healthy cells. 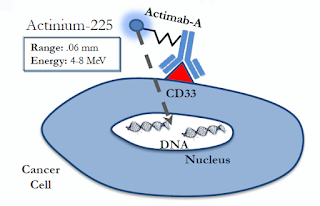 This Phase 2 clinical trial is a multicenter, open-label study that will enroll 53 patients. Patients will receive 2.0 µCi/kg/fractionated dose of Actimab-A via two injections given at day 1 and day 7. The Phase 2 trial is designed to evaluate complete response rates at up to day 42 after Actimab-A administration, where a complete response is defined as complete remission (CR) or a complete remission with incomplete platelet recovery (CRp). A formal interim analysis is expected to occur in mid-2017 with topline results expected in the second half of 2017. An update on enrollment and an interim look at the first few patients is expected at the ASH conference in early December 2016.

I am optimistic on the potential for Actimab-A in this indication. I do not want investors to misinterpret the purpose of this article. I’m not bearish on Seattle Genetics. I thought it important to explain how the two drugs are different, even though they aim to treat the same patients with the exact same CD33 target. Key important facts about Actimab-A include:

– During analysis of the Phase 1 and previous studies stemming from the HuM195 conjugated alpha particles program, an interesting trend emerged where patients with low peripheral blast burden experienced the best clinical response.

– The protocol for the Phase 2 trial includes pretreating patients with hydroxyurea to reduce peripheral blast count. This should increase the response rate for all patients treated with Actimab-A. Additionally, the required use of low-dose cytarabine has been removed by the FDA for the Phase 2 portion, which should greatly improve enrollment rates and interest among investigators.

– CR/CRi/CRp for the dose Actinium plans to move forward with into Phase 2 (2 x 2 μCi/kg) in patients with low peripheral blast burden was 50%, matching the impressive data from Celator’s VYXEOS™ at 48% reported in March 2016. As a reminder, Jazz acquired Celator for $1.5 billion in June 2016.

– Initial data expected at ASH in December 2016, which is less than two months away.