Can-Fite BioPharma Ltd. (NYSEMKT: CANF) announced on November 1, 2016, that the company reached an agreement with the European Medicines Agency (EMA) on the final design of a global pivotal Phase 3 trial for its lead drug candidate, piclidenoson (formerly CF101), in the treatment of psoriasis. Can-Fite intends to initiate the Phase 3 trial in the second half of 2017. I’ve reviewed the proposed protocol for the trial and I think Can-Fite has positioned themselves well for success in this study. My article below is a brief summary of piclidenoson for the treatment of psoriasis and why I believe the Phase 3 trial has an excellent chance to succeed.

The planned Phase 3 trial will be a randomized, double-blind, placebo- and active-controlled study that will investigate the efficacy and safety of daily piclidenoson administered orally compared to Otezla® (apremilast) in approximately 400 patients with moderate-to-severe plaque psoriasis. Can-Fite expects to conduct the study “globally,” which will include sites in the U.S. Management will also utilize the A3AR biomarker to screen patients for enrollment in the study. The study is designed to have four arms:

Randomization will be in a 3:3:2:3 ratio. Medication will be taken orally twice daily for 32 weeks in a double-blinded fashion. The primary endpoint will be the proportion of subjects who achieve a Psoriasis Area and Severity Index (PASI) score response of ≥75% (PASI-75) at week 16 compared to placebo. Important secondary endpoints will be non-inferiority to Otezla® on week 32 and efficacy and safety data for piclidenoson through the extension period of up to 48 weeks of treatment. The trial is expected to initiate during the second half of 2017.

Why I think The Odds Favor Success

The primary endpoint of the EU-centric Phase 3 study will be piclidenoson 2 mg and 3 mg vs. placebo. Based on the data from the company’s Phase 2/3 study conducted in the U.S., Europe, and Israel, I believe this endpoint has a very good chance to be met. For example, analysis of the Phase 2/3 data showed statistically significant separation from the placebo during week 20 through 32 (see below). 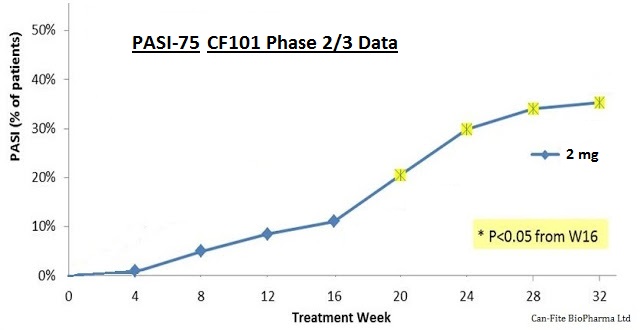 The Phase 2/3 trial did not show separation at week 16; however, there are two important differences that give me confidence the Phase 3 trial has a much better chance to succeed. Firstly, Can-Fite upped the dose in the Phase 3 study, which now includes a 3 mg piclidenoson arm. A 50% increase in dose should improve the response rate for patients. In Can-Fite’s Phase 2 study, a linear effect was observed; the 2 mg dose reported a PASI-50 score of 35% compared to the 1 mg dose at only 21%. Can-Fite did observe a reduced effect with 4 mg and above, but it is likely that the 3 mg arm will show an improved response in the upcoming Phase 3 study. Importantly, Phase 1 and 2 studies show piclidenoson is safe and well-tolerated at doses up to 4 mg.

The second important difference between the Phase 2/3 study and the planned Phase 3 study is the inclusion of the A3AR biomarker as a screen for enrollment. Recall, piclidenoson is an orally bioavailable A3 adenosine receptor (A3AR) agonist. Scientists have discovered that the Gi protein-associated A3AR is found to be over-expressed in inflammatory and cancer cells vs. low expression of the receptor if found in normal cells. The mechanism of action of adenosine agonism in inflammatory conditions involves deregulation of the nuclear factor-κB (NF-κB) and the Wnt signal transduction pathways resulting in apoptosis of inflammatory cells.
Data from the recent Phase 2b RA study showed that 70% of target RA patients had A3AR overexpression defined as a 1.5-fold increase over a predetermined normal population standard. There was a clear greater response to piclidenoson in these patients compared to patients with normal levels of A3AR expression (see below). Given the similar etiology and pathophysiology between RA and psoriasis, it is logical to assume that a similar response in psoriasis patients on PASI-75 will exist. 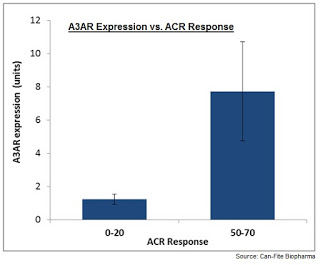 As such, the combination of the higher therapeutic dose and the A3AR biomarker for patient selection should greatly improve the odds of success for this Phase 3 trial. Data from BIO/BioMedTracker supports the hypothesis that use of a selective biomarker improves the odds of success in a Phase 3 clinical program.

Rationale For Including Otezla

The rationale of comparing piclidenoson to Otezla® (apremilast) is sound in my opinion. Firstly, both drugs are orally available, which is a big dosing advantage over the injection-based biologics like Humira®, Enbrel®, and Costenyx®. Secondly, the downstream mechanisms are similar. Otezla is a phosphodieserase-4 (PDE-E) inhibitor. PDE4 is the major enzyme class responsible for the hydrolysis of cAMP, an intracellular second messenger that controls a network of pro-inflammatory and anti-inflammatory mediators. Otezla reduces expression of TNF-α. Piclidenoson also inhibits TNF-α through modulation of the Wnt and NF-κB signal transduction pathways.

Finally, Otezla is gaining sizable market share in the category and non-inferiority of piclidenoson to the drug will go a long way in helping Can-Fite or its commercial partner gain market share once approved. Otezla was approved in March 2014 and sales over the past twelve months are just shy of $900 million. Celgene has been picking up share with Otezla likely due to the drugs decent efficacy, clean safety profile, and oral delivery. The marketing message for Otezla is that it treats psoriasis differently. It’s not an injection or cream; it’s a simple oral pill with a novel mechanism of action. That is resonating well with physicians and patients, as evidenced by the strong market share gains for the drug since launch. 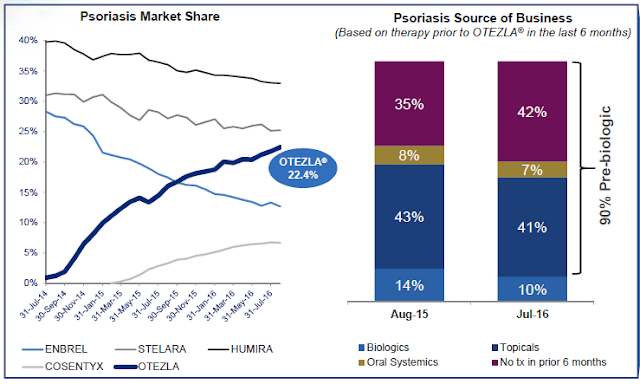 The Otezla Phase 3 data has been both published and presented. Celgene ran two parallel Phase 3 programs, ESTEEM 1 and ESTEEM 2. Results from ESTEEM 1 were published in the Journal of the American Academy of Dermatology in July 2015 (1). The data show that at week 16, significantly more patients taking apremilast achieved 75% or greater reduction from baseline Psoriasis Area and Severity Index score (PASI-75) versus placebo (33.1% vs. 5.3%; P < 0.0001; primary endpoint). Results from ESTEEM 2 were published in the British Journal of Dermatology in December 2015 (2). Results showed that at week 16, significantly more apremilast patients achieved PASI-75 versus placebo (28.8% vs. 5.8%; P < 0.001). Below is a graph presented by investigators from Celgene’s Phase 3 ESTEEM 1 trial, presented at the American Academy of Dermatology annual meeting in March 2014 (3). It shows the PASI-75 data for all patients in ESTEEM 1. 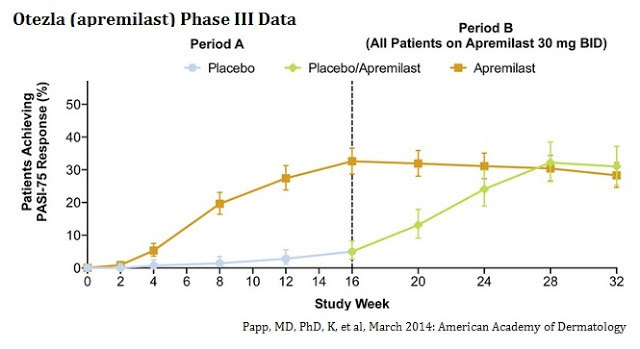 In April 2015, Can-Fite reported further analysis from the company’s double-blind, placebo-controlled Phase 2/3 clinical trial with piclidenoson for the treatment of moderate-to-severe plaque psoriasis. The study included 326 patients through 17 clinical centers in the U.S., Europe, and Israel with a duration of 32 weeks. Analysis of the entire study period revealed that by 32 weeks of treatment with piclidenoson, 33% of the patients achieved PASI-75, and the mean percent of improvement in PASI score was 57%. Results were statistically significant at P < 0.001. Furthermore, the data showed a cumulative and linear improvement during weeks 16 to 32 (see figure 2 above).

To compare the data directly, I’ve put together a superimposed chart merging the data from the two separate programs. It shows the efficacy of piclidenoson reported from the Phase 2/3 clinical program compared directly to the data from the Phase 3 ESTEEM 1 pivotal trial with Otezla (note: data from ESTEEM 1 was numerically superior to ESTEEM 2, 33.1% vs. 28.8%, at week 16) using PASI-75 response rate. 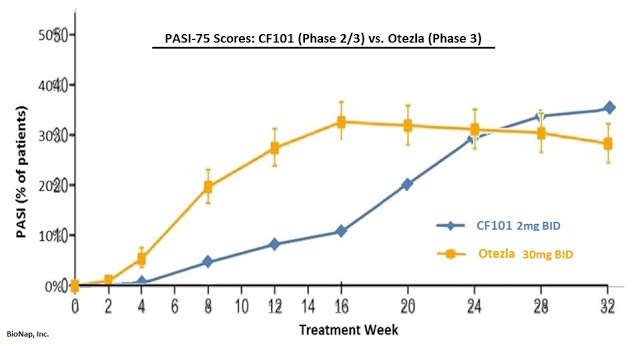 Otezla looks to be the superior drug after 16 weeks of therapy, but ultimately plateaus and potentially even loses efficacy by week 32. Conversely,  the PASI-75 response rate for piclidenoson continues to improve out to week 32. As a reminder, the key secondary endpoint for Can-Fite’s planned Phase 3 program is non-inferiority of PASI-75 at week 32. Based on this superimposed data, I think Can-Fite will succeed in this very important secondary endpoint.

I suspect that Can-Fite will analyze other PASI endpoints in its Phase 3 trial. Below are graphs of the PASI-50 and PASI-90 response rate for the CF101 Phase 2/3 data with data reported by Celgene from the ESTEEM 1 superimposed. The PASI-90 data are striking.

I’m excited to see Can-Fite’s Phase 3 trial get underway. Several aspects have me feeling good about the outcome. Importantly, the Phase 2/3 data showed statistically superior PASI-75 results versus placebo starting at week 20 for 2 mg piclidenoson. The planned Phase 3 trial will study 2 mg and a new higher dose of 3 mg piclidenoson with PASI-75 as the primary endpoint. I think incorporating a higher dose (50% higher) in the Phase 3 trial should help accelerate the response to the drug. I also think using the A3AR biomarker to screen patients for enrollment is a brilliant idea. The Phase 2 data with piclidenoson in RA showed these patients have vastly improved response to the drug.

The chart above depicting Otezla’s market share gains show Celgene is taking share from Enbrel, Stelara, and Humira. Can-Fite believes that piclidenoson can demonstrate efficacy and safety non-inferior to Otezla at week 32. I think that’s a very good bet. Superiority to placebo at week 16 also looks achievable. I think the odds are in Can-Fite’s favor by 2-1.