On December 7, 2016, the U.S. Senate passed the 21st Century Cures Act. President Obama said he plans to sign the bill into law as soon as it hits his desk. The Act, which is designed to facilitate FDA approval of new drugs and medical devices, is a major win for the Pharmaceutical and Medical Device industry, and its supporters such as PhRMA and AdvaMed. Industry spokespersons praise the Act as a way bring about more innovation and get treatments to patients faster. The bill passed by an overwhelming 94-5 and 326-24 majority.

The 21st Century Cures Act will enhance current FDA programs and allow for a quicker path for breakthrough pharmaceutical products targeting debilitating diseases with limited alternative treatment options.The measure aims to benefit people with chronic diseases, with areas of mental illness and opioid addiction / chronic pain getting specific attention. The U.S. NIH will get $4.8 billion in new funding to specifically focus on new cures and innovations in biomedical research.

A Big Win For The Cannabis Industry

Importantly, the Act directs the U.S. FDA to make decisions based on the use of “real world evidence” for approval of new indications for FDA-approved drugs. The use of observational studies, patient input, anecdotal data, and other retrospective research greatly reduces the cost and time to market compared to conducting large randomized clinical trials. This should increase the odds of success as the FDA may focus less on objective measures and prohibitively expensive placebo-controlled randomized clinical trials.

The cannabis industry should benefit greatly from the passing of the Cures Act. The medical benefits of marijuana, or more specifically, cannabinoids, are real. There is no shortage of literature supporting the medical benefits of cannabinoids. Hundreds of peer-reviewed publications exist linking therapeutic benefit in the treatment of mental health disorders like PTSD, Parkinson’s, Huntington’s, restless leg, epilepsy, multiple sclerosis, and traumatic brain injury. However, the most common uses of cannabinoids or medical marijuana are in glaucoma and in chronic and neuropathic pain. In fact, so accepted is the antiemetic effect of medical marijuana that it is now common practice for many terminally ill cancer patients.

That being said, despite the overwhelming real-world, observational, and anecdotal evidence of therapeutic effect to marijuana, U.S. FDA approval of synthetic cannabinoids tallies only two products and less than $200 million in sales. These are the antiemetic drugs Marinol® (dronabinol) by AbbVie and Cesamet® (nabilone) by Valeant/Meda. By signing the bill into law, President Obama is directing the FDA to look at therapeutic options like medical marijuana and synthetic cannabinoids and decide, “Is it safe and do people feel it works? If so, let’s get it approved and to patients as soon as possible!”

According to the Kim Foundation, 26% of American’s over the age of 18 suffer from some sort of mental health disorder, including depression, anxiety, OCD, PTSD, schizophrenia, bipolar disorder, and ADHD. That’s 60 million people! These are areas where medical marijuana is commonly used in the U.S. In fact, many states already approve the use of medical marijuana for conditions such as insomnia, epilepsy, depression, anxiety, and PTSD. The passing of the 21st Century Cures Act will allow biopharmaceutical companies to take this type of real-world data and expedite new or abbreviated drug applications for synthetic or purified cannabinoids targeting this enormous market. 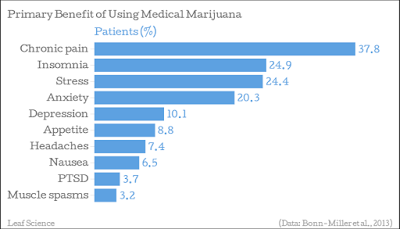 According to data from the 2012 National Health Interview Survey (NHIS), 11.2% of American adults (~25 million people) have experienced some form of pain every day for the past three months. The study also found that even more people, nearly 18%, suffer from “severe levels” of pain. The NIH estimates over 2 million Americans take opioids on a daily basis. Nearly 80% will suffer from abdominal and GI related issues. The American Society of Addiction Medicine estimates 25% of chronic opioid users become addicted to the medications and suffer debilitating long-term health consequences.

As noted in the bar graph above, chronic pain is the most common use of medical marijuana in the U.S. today. The 21st Century Cures Act earmarks specific funding to fight the U.S. opioid epidemic and find new, innovative medications for patients suffering from chronic pain. I think cannabis will be at the center of this focus.

The U.S. government is making an effort to streamline the drug approval process for “known safe and effective” medications by passing the 21st Century Cures Act. Target areas of benefit are cancer, mental health disorders, and chronic pain. These are among the core areas of focus for many legitimate biopharma companies in the cannabis industry. The Cures Act provides a roadmap to get these medications that are used today by millions of patients for perhaps off-label or unapproved indications through the FDA process in an expedited manner. This potentially lowers the bar for approval and certainly reduces the cost and time small biopharma companies must spend to get through this process.

The benefits of cannabinoids and medical marijuana are known throughout the world, and in the households of patients living in states with approved medical marijuana use in the U.S. I believe the best area for investment in this industry is with biopharma companies working on safer, more effective purified and synthetic cannabinoid products. Congress just sent a bill to the President that will allow these compounds an expedited path through the FDA approval process. That is very exciting for cannabis investors.