Several months ago I wrote an article highlighting RedHill Biopharma’s (NASDAQ: RDHL) RHB-104, a patent-protected combination of clarithromycin, clofazimine, and rifabutin in a single oral pill, currently in Phase 3 trials for the treatment of Crohn’s disease (CD). I encourage investors to view that article >> HERE << because it provides a very good background on RHB-104 and the “MAP Hypothesis”. In short, the MAP Hypothesis is the supposition that mycobacterium avium paratuberculosis (MAP) is a key instigator in the pathophysiology and potentially even the underlying cause of CD.

This notion has gained significant scientific steam over the past several years, with both the European Directorate General of Health and Consumer Protection (1) and the American Academy of Microbiology (2) conducting separate detailed analyses providing support to the proposed explanation. After all, the concept of an obligate pathogenic bacterium as the underlying cause for a gastrointestinal inflammatory disease is a scientifically validated concept. We know now that Helicobacter pylori, a Gram-negative microaerophilic bacterium, is the underlying cause for gastritis and peptic ulcer disease. This discovery led to the awarding of the Nobel Prize in Medicine to the two clinical investigators that made the discovery (3). Targeting H. pylori is the focus of many drugs designed to treat  gastric and peptic ulcers, including RedHill’s RHB-105, also in Phase 3 clinical trials. More on RHB-105 can be found >> HERE <<.

Beyond the lead indication in CD, RedHill management believes that RHB-104 has potential in a number of other inflammatory and autoimmune diseases. The individual components have demonstrated antibiotic efficacy, as well as been shown to have anti-inflammatory and immunomodulatory activities. In late November 2015, RedHill announced the completion of dosing in a Phase 2a study for RHB-104 for the treatment of Multiple Sclerosis (MS). The potential for RHB-104 in MS is the basis for this article.

Multiple sclerosis (MS) is a chronic autoimmune and inflammatory disease that affects axons in the brain and spinal cord (central nervous system). Specifically, the protective sheath called myelin that covers nerve cells and helps conduct electrical impulses is destroyed. This causes transmission problems where the brain cannot effectively communicate with neurons, muscles, and glands in the body. This process may also lead to the deterioration of the nerve cells themselves, a condition that is not reversible.

Signs and symptoms of MS vary widely and depend on the amount of nerve damage and which nerves are affected. Some people with severe MS may lose the ability to walk independently while others may experience long periods of remission without any new symptoms. As such, the disease is further categorized into one of four types: primary progressive (PPMS), relapsing-remitting (RRMS), secondary progressive (SPMS), and progressive relapsing (PRMS). The primary symptoms of MS can include vision difficulties, sensory symptoms, vertigo, tingling or pain, extreme fatigue, bladder/bowel/sexual dysfunction, and problems with memory and concentration.

The etiology and pathogenesis of MS have been an area of debate during the past 50 years; however, it is recognized that MS is a complex disease with different clinical and pathological phenotypes, perhaps reflecting different pathways to tissue injury. Thus, MS may not be a single disease entity. Nevertheless, it is now clear that the core process in MS is inflammation, with T cells and their mediators triggering injury of axons and their myelin sheaths through a complex sequence of events. The T cell–mediated inflammation is driven by an autoimmune process, which in turn can trigger a degenerative phase that is immune independent (4). Over time, the pathological changes become dominated by widespread microglial activation associated with extensive and chronic neurodegeneration, the clinical correlate of which is a progressive accumulation of disability (5).

MAP And A Link To MS

The MAP Hypothesis as it relates to MS is not as well subscribed as in CD; however, there are epidemiological studies that suggest a correlation between MAP infection and incidence of MS. For example, work published in PLOS One found the presence of MAP DNA in 42% of the MS patients from a small study (n=106) conducted in Sardinia versus only 12% of healthy controls. The authors also identified an extremely significant humoral immune response revealed by the MS patients against the MAP protein, MAP2694 (6). 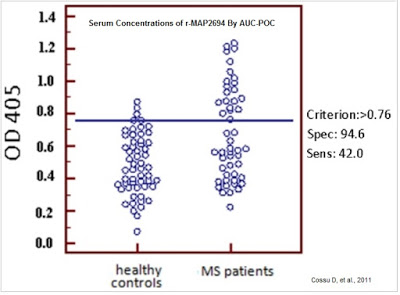 A larger study (n=700) published by the same group in The Journal of Multiple Sclerosis confirmed the higher presence of MAP DNA and MAP-associated proteins in Sardinians with MS than healthy controls. Their work shows the MAP infection rate in Sardinians with MS was 39.2% versus only 6% in patients without MS (7). The authors admit that the higher incidence of MAP positivity may have been influenced by MS-specific therapies and steroids and that more work in larger populations outside of Sardinia are necessary to confirm the link, but these initial data suggest a role of MAP in MS pathogenesis.

The Anti-inflammatory & Immunomodulatory Effects Of RHB-104

Beyond the potential link between MAP and MS, management at RedHill believes there are important anti-inflammatory and immunomodulatory characteristics of RHB-104 that are worth exploring. For example, work done by Leanza L, et al., 2012 shows that clofazimine, one of the components of RHB-104, greatly diminishes tumor growth in a mouse model of melanoma. The drug rather selectively blocks Kv1.3, a potassium channel which over-expression has been linked to certain B cell lymphomas and glioma.

Work done by Fukutomi Y, et al., 2011 shows the drug exhibits apoptosis-inducing activity in macrophages by up-regulating lysosomal enzyme activity. This may be the underlying mechanism for the drug’s antibacterial properties. However, clofazimine also increases superoxide anion production and degranulation by stimulated neutrophils, potentiated by tumor necrosis factor alpha (TNF-alpha). This suggests an anti-inflammatory mechanism as well. Clofazimine is already in use for the treatment of various pathologies, including psoriasis, chronic graft-versus-host disease, and granulomatous cheilitis.

Macrolide antibiotics are known to exert anti-inflammatory actions in vivo, including certain effects in COPD patients. Marjanovic N, et al., 2011 studied the immunomodulatory effects of macrolide antibiotics, including clarithromycin, another component of RHB-104, on the in vitro production of a panel of inflammatory mediators. The data show clarithromycin exhibited pronounced, concentration-related reduction of IL-1b, IL-6, IL-10, TNF-alpha, CCL3, CCL5, CCL20, CCL22, CXCL1, CXCL5, and G-CSF release. Pro-inflammatory cytokines, like IL-1b, IL-6, and TNF-alpha, amplify the inflammatory response, while growth factors, such as GM-CSF and G-CSF, increase the survival of neutrophils and macrophages in the airways. This work built off previous work done by Khan A, et al., 1998 that demonstrated clarithromycin possesses immunomodulatory activity by altering cytokine production in human monocytes.

RedHill Biopharma has conducted four previous preclinical studies, including studies in an experimental autoimmune encephalomyelitis (EAE) mouse model of looking at the potential of RHB-104 as a treatment for MS. Below is a quick summary of the preclinical work:

– Study No. 1: The first preclinical study measured cytokine production (biomarkers of inflammation) and demonstrated that the RHB-104 treatment led to a significant reduction of pro-inflammatory cytokine concentrations of IL-6 and TNF-alpha, which are associated with inflammation and MS, compared to the control group (completed 2012).

– Study No. 2: The second preclinical study measured the efficacy of RHB-104 as prophylactic therapy, and the treatment with RHB-104 demonstrated a significant reduction in the inflammatory
area and level of demyelination, compared with the control group (completed 2012). 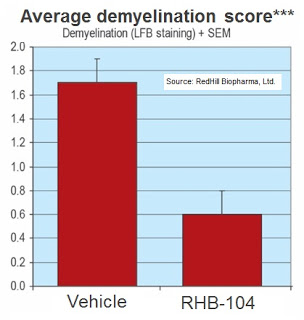 – Study No. 4: The fourth preclinical study showed that RHB-104 inhibited production of pro-inflammatory cytokines IL-6 and TNF, indicating that RHB-104 is a potential therapy for inflammatory diseases where these cytokines have been shown to play a critical pathological role, like MS (completed 2013).

Following these preclinical studies, RedHill initiated a Phase 2a proof of concept clinical trial at two sites in Israel. This clinical trial, CEASE-MS, was initiated in June 2013 and is intended to evaluate the safety and efficacy of RHB-104 as an add-on therapy to interferon beta-1a (Avonex® or Rebif®) for the treatment of RRMS. The primary endpoint of the study is the number of combined unique active lesions after 24 weeks of treatment with RHB-104, as compared to baseline. Additional endpoints include changes in cytokines, relapse rate, Expanded Disability Status Scale (EDSS) and the safety and tolerability of RHB-104. A total of 18 patients were enrolled. Management noted in late November 2015 that the trial completed dosing and top-line results are expected in the next few weeks.

MS is a potentially enormous market opportunity for RedHill. In the U.S., an estimated 400,000 people have the disease, approximately 85% with the relapsing-remitting form (7). The RRMS pharmaceutical market is one the largest opportunities in pharma, with sales of approximately $16 to $17 billion on a global basis (RBC Capital Markets, October 2015). MS drugs are among the most expensive drugs, averaging between $50,000 and $60,000 per year (8). Successful new drugs are blockbusters, as evidenced by the recent success of Biogen’s Tecidfera® and Novartis’ Gilenya®.

I’m not going to predict the success or failure of RHB-104 in this Phase 2a trial. Betting on the results of any Phase 2a study is a surefire way to put yourself out of business. The MAP Hypothesis and rationale for testing RHB-104 in CD resonates well with me, but then again that is a Phase 3 program and there is significantly more literature to support the concept of MAP in the etiology and pathogenesis of CD than in MS. That being said, it is clear that RHB-104 has both anti-inflammatory and immunomodulatory activity, and combining the drug with interferon beta-1a, a cytokine that balances the expression of pro- and anti-inflammatory agents in the brain, is an interesting approach.

The slide below from the company’s investor presentation shows RedHill management has big plans for RHB-104. Beyond the lead indication in CD and this proof-of-concept trial in MS, additional programs in rheumatoid arthritis, lupus, type-1 diabetes, and psoriasis are also planned. In about a month, investors will get their first glimpse as to whether or not RHB-104 holds potential beyond CD. CD data is expected late 2016. Stay tuned! 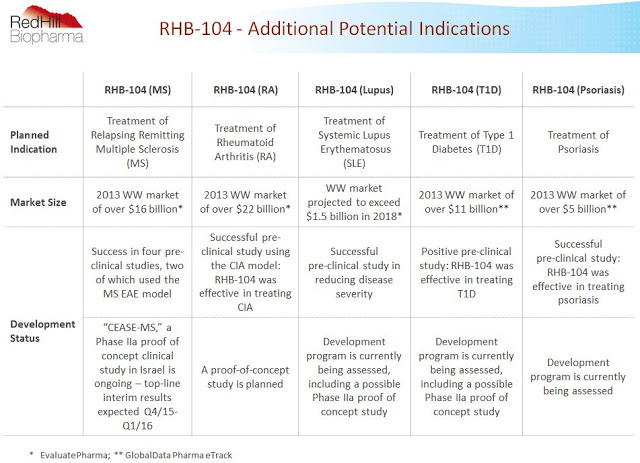